There is something strangely alluring to me about music that is aesthetically pretty while being lyrically more dark. Any mope with an acoustic guitar can make sad sounding music, but how about with shimmering electronic beats and a meticulous and beautiful female lead vocalist? Not so simple. That is part of what makes the mysterious Swedish band jj’s excellent third album jj n° 3 so compelling. 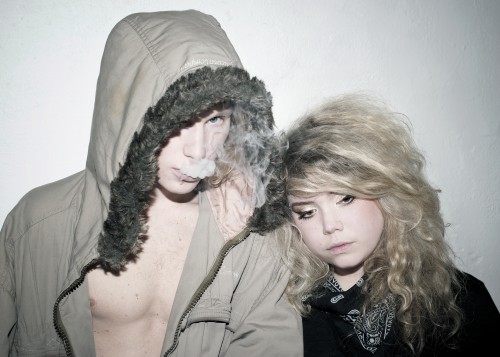 The dark undertones start off immediately with the somber keyboard lines of “My Life,” which features angel voiced singer Elin Kastlander singing the dark lyrics “Dear Lord, you took so many of my people, I’m just wondering, why you haven’t taken my life? What the hell am I doing right?” Things don’t really get much more optimistic over the ensuing 9 song, nearly 30 minute album. The music is sparse throughout, with guitars, keyboards and harmonicas mixing together with minor electronic flourishes that are much less bright and poppy than the groups last album, jj n° 2. “Let Go” weaves story of friends dying of heroin overdose over a lush, almost disco revivalist musical backdrop provided by Joakim Benon, the non singing half of the group. Tracks like “Into the Light,” “Voi Parlate, lo Gioco,” “No Escapin’ This” and “You Know” all up the tempo ever so slightly, but still have ominous undertones that linger throughout the album. Although there are many strong songs, jj n° 3 is an album that seems to work best as a collective whole. The tracks segue together nicely and show off the atmospheric production of Benon and the fractured but exquisitely beautiful singing of Kastlander. While none of the songs stand out like jj n° 2 highlight “From Africa to Malega,” the album works well as a whole and is a great album to put on in the late night hours.

The lush music and dark lyrical content make jj n° 3 an album that isn’t going to be for everyone, but it is a strong album none the less. The music is less adventurous than jj n° 2, but the texture and feel of the album are much stronger. The whole album feels covered in a sense of dread and conveys a strong feeling of despair in a way that is often overdone in pop music. The depth and brevity of the album may not be apparent to everyone upon first listen, but it is an album heavy on style and one that is richly rewarding for those who let the compelling juxtapositions of pop and gloom really soak in.