Lights Out Asia: In The Days of Jupiter Review 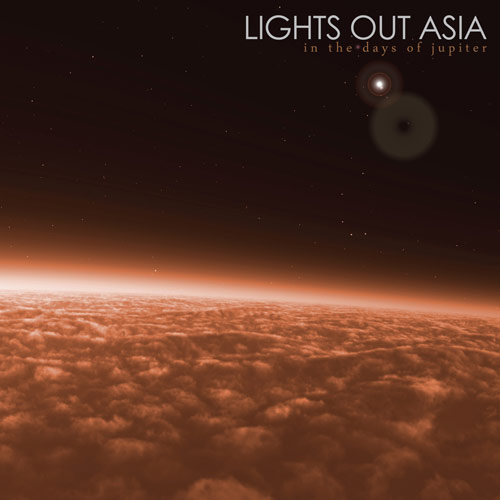 “JUPITER=MASSIVE.”  With that equation inscribed on the inside cover of In the Days of Jupiter, the latest album from Milwaukee’s dream-pop-cum-post-rock outfit Lights Out Asia, one might expect a monumental record of unfathomably epic rock.  That, however, is not what you get.  Perhaps “JUPITER=EXPANSIVE” would have been more appropriate, as the new album is patient, drifting, and rewarding.

Meticulously molded ambient soundscapes permeate In the Days of Jupiter and give it its expansive sound.  The introductory track “All These Worlds Are Yours” features an arresting female vocal sample and a nearly imperceptible build.  Six minutes of heavenly drone prefaces “Great Men from Unhealthy Ground.”  With a swelling ambient loop, “All is Quiet in the Valley” is at once contemplative and hopeful, not unlike Akira Yamaoka’s work on the Silent Hill film and video game scores.  At once cold and lonely, the ambiance created by Lights Out Asia is fit for the far, lightless reaches of the solar system.

The best swaths of the album are where Lights Out Asia explore previously uncharted terrain.  “13AM” is probably the heaviest song they’ve ever recorded.  A metronomic intro paired with dissonant synths gives way to a noir piano riff, crystalline and brimming with displaced malice.  Vocals burst through the surface of the mix for a fleeting moment, only to be harshly processed through a digital effect and yanked back under, as if vainly trying to escape the gravitational field of a giant planet.  This is, appropriately, where a Jovian wall of sound crashes in.  On “Then I Hope You Like the Desert,” ominous chanting nobly competes with a Billy Idol-esque drum part and star-scratching guitar.  Even with a number of tightly composed tracks, Lights Out Asia tend to fall back on a couple of tried-and-true hooks.

For good and bad, In the Days of Jupiter features much of the melodramatic instrumentation for which the band is known.  Their last album, Eyes Like Brontide, was thoroughly underwhelming, and the urgent, off-kilter drumkit and gooey vocals of “Currents Meet the Tide” could have been stolen right off of it.  On the other hand, “Shifting Sands Wreck Ships” navigates well-traveled Lights Out Asia-territory, but includes an unexpected trip-hoppy beat and tasteful cello.  This is the gamble of having a firmly established sound; you either risk floating in the doldrums of mediocrity or briskly ride a headwind to exotic locales.

For the better part of an hour, In the Days of Jupiter guides you through an introspective, marvelous landscape.  Some tourist traps have made it on to the itinerary—mostly for the uninitiated traveler—but the tour is rich novelty and wonder.

In The Days of Jupiter will be released on 8/9 on n5MD.