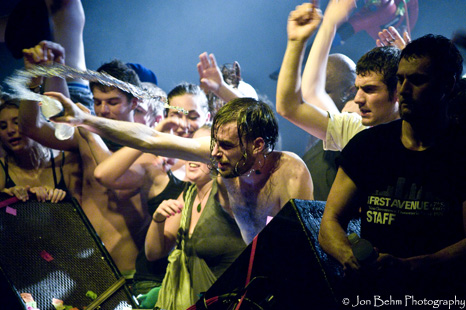 On New Years Eve this last year, sample friendly wild man Girl Talk set up shop in Chicago for one of his epic performances.  While Gregg Gillis’s shows, with crowds crashing the stage early and often, are usually entertaining enough, he upped the ante with a full on house being built on stage.  Words don’t really describe it, so watch the three part movie below.

Canadian Mennonite November 1, 2010 | Longhurst, John If she were alive today, would Doris Janzen Longacre, author of the More-With-Less Cookbook and Living More With Less, have a Facebook account?

That’s the question being asked by a new Facebook group created in advance of the Nov. 1 release of Living More With Less: 30th Anniversary Edition. here music notes facebook

“As I’ve been putting together this page for the new edition of LivingMore With Less, I can’t help but wonder what Doris would think of Facebook,” writes the group’s creator, Paul Boers, of Longacre, who died in 1979.

“Access to Facebook is a privilege of the developed world,” Boers says. “It’s no coincidence that over 60 percent of Facebook users live in North America and Europe.” On the other hand, he notes, “Facebook is one way that people can keep in touch with faraway friends and relatives without travelling or racking up phone bills.” It also “gives users a platform to band together to work for social causes,” he adds.

“At a time when ‘green’ is trendy, how do we keep it tethered to an authentic concern for the poor and for the planet?” Boers asks. “Has Doris’s vision been realized or co-opted? How do we avoid oversimplifying the complicated economic and ecological realities facing all of us? And how can we pursue more-with-less ideals without settling into self-castigation, smugness or doomsday sermonizing?” [Author Affiliation] BY JOHN LONGHURST Herald Press Release Longhurst, John go to site music notes facebook