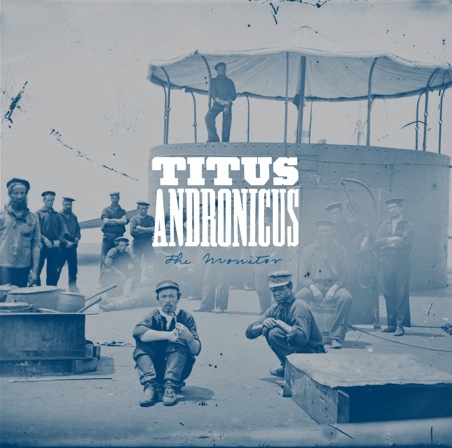 I know, I know. You are probably thinking the same thing I did when you get the rundown of the new Titus Andronicus album The Monitor. Another god damn punk rock concept album about the civil war battle Hampton Roads?! Really, when will people put these generic ideas to rest?

Topic selection notwithstanding, Titus Andronicus was pretty serious guys on their debut record The Airing of Grievances, and up the ante with their excellent sophomore release The Monitor. The concept, which on paper sounds heavier and less engaging than it comes across, is played well on the record. Sounding like a more historically inclined version of Conor Oberst fronting the Gaslight Anthem, the band is really firing on all cylinders for this epic album. The songs feature spoken interludes by such famous friends as Craig Finn and members of the Vivian Girls, which somehow end up not being cheesy. As for the music, the guitars slash and the tracks meander into lengths (7+ minutes all the way up to the 14 minute track “The Battle of Hampton Roads”) that lesser bands would surely fuck up. Like all “concept” albums that don’t fall flat on their face, The Monitorweaves in stories and themes that are more common than their dense premise would suggest. On songs like the amazing “No Future Part Three: Escape From No Future,” the song reaches its peak with snare drums rolling and the band singing “you will always be a loser.” While it may in fact be about events that happened hundreds of years ago, it has a raw, primal feel that makes the kind of music Titus Andronicus so powerful.

Though the content is meant to be based on a complex and far reaching subject matter, The Monitor is one of the most heart on its sleeve, powerful records of this young decade. Much like their debut record, the music is a complex mix between highly literate lyrics and more shambolic, rambling music. The band get bonus points for trying something so far outside of the box, but they really don’t need them, as this is a compelling, exciting record. I’m not sure what will be the next step in the evolution of this great band, but I am excited to see.