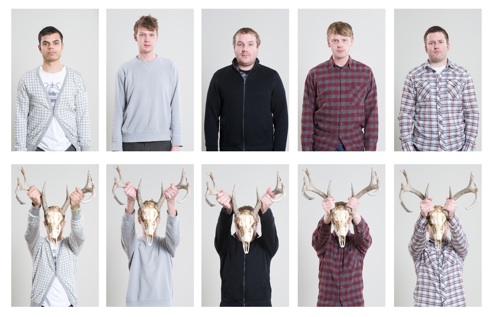 I have come to realize that I often give less credit than I should to bands who really make overt efforts to make expansive music. For whatever reason, it takes a band with undeniable talent (ala Grizzly Bear) for me to really buy into sensationalistic pop music. I for whatever reason am more naturally drawn to music that is more abrasive, whether it be three chord rock and roll or pop music with a noisy kick to it. That leaves me in a conundrum when reviewing albums like the self titled debut album from local group Hunting Club.

After the initial noise collage of 59 second opener “How’d It Get Burned,” the album really seems to hit its pop music making groove. The problem for me is that is sounds a little too calculated, too perfectly thought out. While Grizzly Bear is clearly a reference point, Hunting Club never quite reach the dizzying heights that Grizzly Bear have in the past. The guitars are shimmering, the vocals perfectly manicured and the rhythms seem to swell and cascade at the right moments. Over the course of the 11 song, 35 minutes, the songs kind of melded together, which makes for a more cohesive record but kind of lost me at points. There were a few moments that stand out from the rest of the tracks. Both “Raising Arizona” and “Real Chance” seem to stand out as songs that are more fully developed and pack an emotional punch that some of the other tracks only offer only on a surface level, really reaching the lofty heights the band are shooting for.

In my quest to be an impartial reviewer, I want to acknowledge that to certain music lovers, this album is going to hit just the right spot. For whatever reason, this type of well polished pop music often doesn’t get my heart racing. I am confident that the band will do well, Hunting Club’s self titled debut album just wasn’t an album that connected with me.

States News Service May 7, 2010 WASHINGTON — The following information was released by the office of Michigan Rep. John Dingell:

Congressman John D. Dingell praised the Department of Transportation (DOT) decision to grant Delta Airlines and Detroit Metro Airport one of four new routes connecting U.S. travelers to Tokyo’s Haneda Airport. The Congressman discussed the route with Secretary of Transportation Ray LaHood and joined with the Michigan Congressional delegation to push for the new route. These new routes to Haneda will be the first U.S. route to that airport in more than 30 years. this web site detroit metro airport

“We made a compelling case,” Dingell said. “Detroit and Tokyo do an incredible amount of business together and it is critical that citizens of both countries have this kind of access. Haneda is much closer to central Tokyo than Narita Airport. It is a true testament to quality of work being done by Delta and Detroit Metro Airport. All the major airlines and several cities wanted this route, but New York, Los Angeles, Honolulu and Detroit were the only cities to get them.” Japan’s main airport, Narita, is more than 40 miles outside of Tokyo.

Delta’s Detroit hub will also provide convenient one-stop connecting service to more than 100 cities. There are more than 500 Japanese companies located in Michigan and Michigan exports more than $1.5 billion annually to Japan. Service to Haneda will be strongly supported by the local market, as well as from connecting points at Detroit Metro. here detroit metro airport

The other new routes: American Airlines will operate a flight from JFK Airport in New York, Delta Air Lines has a second flight originating in Los Angeles and Hawaiian Airlines from Honolulu.

Haneda is scheduled to open a new runway to accommodate international service in October. The airlines are required to begin Haneda operations by January 29, 2011. Objections to the show-cause order are due in ten days, and answers to objections are due seven days afterward. After the comment period ends the Department will issue a final decision.