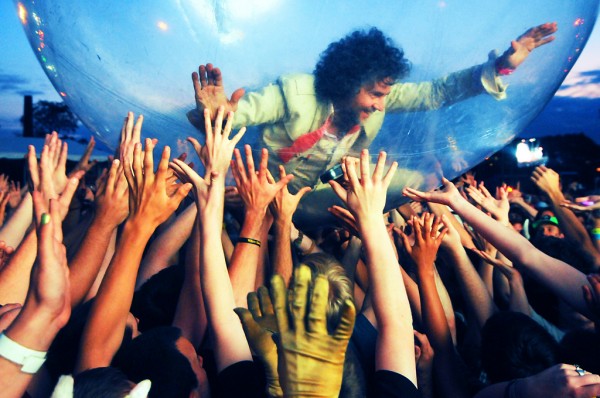 It was a strange, but positive, déjà vu experience as I drove east towards St. Paul on the second consecutive Sunday for a show at Roy Wilkins featuring a great double bill that would bring back nostalgia for any fan of “indie” rock.  Last Sunday was Pavement and No Age, while this Sunday was a great bill featuring Ariel Pinks Haunted Graffiti and The Flaming Lips.

It was a strange situation for me during Ariel Pink’s stellar set to hear the middle age guys behind me vehemently heckling the band and saying how weird and awful they were.  While a majority of the crowd seemed into the band, I couldn’t help but wonder if these guys dads were the same people heckling the Flaming Lips 20 years ago when they opened for a bigger band.  Neither here nor there, but helped to color my experience watching Pink’s excellent 40 minute set and made me appreciate them even more.  The group mixed in older songs with the more polished material from their recent release Before Today for a set that helped expand upon their equally great set earlier this year at the Entry.

Highlights, like on the album, included the sharp “Bright Lit Blue Eye” and the set closer “Round and Round,” which is probably as close as the group will ever come to a “hit.” Ariel Pink seemed especially invigorated by the large crowd and was entertaining as he joked about how everyone was there to see him and purposely forgetting who the headliners were.  While I am fairly certain Ariel Pink won’t ever be headlining crowds as big as the Flaming Lips have been for the last decade, it still was cool to see the talented and influential group on stage in front of such a large crowd, being as weird and great as ever.

Sunday was the third time I have seen the Flaming Lips live, and the first time their setlist didn’t rely heavily on material from The Soft Bulletin and Yoshimi Battles the Pink Robots.  Even focusing on the darker, more hypnotic material from their 2009 release Embryonic, the band still performed a wildly fun and engaging performance.  For those who haven’t seen the Flaming Lips, I couldn’t explain the extravaganza properly with a million words, as those who have seen the band anytime in the last decade can attest.  While the songs were new, the antics were classic Flaming Lips.  Frontman Wayne Coyne shooting streamers, singing songs on the shoulders of a bear, crawling through the crowd in his inflatable balloon and shooting green lights out of giant hands towards duel disco balls.

Outside of Coynes superhuman showmanship, the band always brings more balloons, confetti, streamers, lights and crazy videos (they come out at the start of the show through a vagina on the screen) than your local circus.  The whole event always feels like a euphoric, drug addled trip to the best sound trackedcarnival of your life.  The problem with a band like the Lips is that with all the song and dance, it is easy for their music to be overshadowed, which is unfortunate.  The band sounded great as usual, running through old classics (“She Don’t Use Jelly,” “Yoshimi Battles The Pink Robots, Pt. 1” and “The WAND”) amongst some of the more intense, focused newer material (highlighted by “See the Leaves,” “The Ego’s Last Stand” and the crushing opener “Worm Mountain”).  They even found time to play the fun “I Can Be a Frog” during the main set, while saving fan favorites “Yeah Yeah Yeah Song” and “Do You Realize” for their stirring encore.  At some point you have to wonder when the spectacle overtakes the band, and I am sure many would argue it already has, but shows like like night make it hard for me to argue with Coyne and crew about the unequivocal enjoyment their show provides.