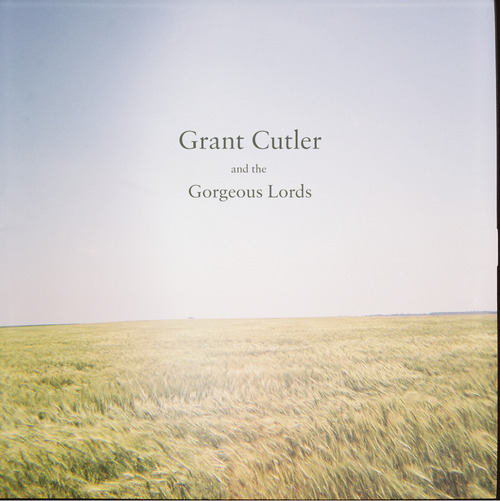 I know what you were thinking.  “It is a bummer that Lookbook broke up, but at least Maggie is working on a side project and now there is this new EP from Grant Cutler and the Gorgeous Lords.  I am sure it sounds just like the great 80’s flavored indie dance music he was making with Lookbook….right?”  Well, if I was close at all to your thought process, I regret having to tell you that Grant Cutler and the Gorgeous Lords couldn’t be farther from the work he did with Lookbook, for better or for worse.

The four song EP is short and not very sweet, with a significant dark streak running throughout the record.   Starting off with the somber, clear eyed “Orphan,” which finds Cutler singing “If I was an orphan, I’d have nothing, nothing to hide.”  It is a pretty morose song that sets the tone for the 4 song, 18 minute album.  Things don’t change much with “Our Love is a Mighty Fortress,” “The Light” and album closer “Hold on to Me.”  The instruments are spares, like a more electronic, less gruff version of Mark Langan’s epically dark solo material.

If you listen to this album expecting to hear anything like Lookbook, you will be disappointed.  Cutler doesn’t yet seem as precise in writing of dark, singer/songwriter tracks as he was creating 80’s electro dance bangers, but you have to take into consideration that this is the group’s first output.  There is definate room for improvement on the record, but also some real potential.  The EP comes across as a talented muscian trying out a new avenue, with imperfect results but a clear indication that really good things could be coming in the future.  It will be interesting to hear what the band has in store next now that Cutler can dedicate all of his time to his new project, as the local scene has already seen how talented an artist Grant Cutler can be.

The Daily Mirror (Colombo, Sri Lanka) June 16, 2009 Colombo, June 16 — EPSI Computers, authorized distributors in Sri Lanka stated that ASUS, the world’s leading producer of motherboards, today put world record-breaking power into the hands of AMD Phenom II users with the launch of the ROG (Republic of Gamers) Crosshair III Formula. Based on the AMD Socket AM3 platform, the Crosshair III Formula harnesses its full complement of ROG-exclusive features and technologies to unleash the full overclocking potential of Phenom II processors-enabling budget-conscious enthusiasts and gamers to enjoy extreme levels of performance at an affordable mid-price point.

Poised for Chart-topping Overclocking Performance Mr. Sankha Jayaratne, Group Product Manager, EPSI Computers stated that AMD’s Phenom II processors have proven capable of being pushed to incredible frequencies when backed by the right hardware-such as the ASUS M4A79T Deluxe-setting several 3DMark06 and CPU-Z world records in recent times. The Crosshair III Formula, with its comprehensive array of industry-leading ROG features, is set to take Phenom II overclocking a big step further-both in terms of benchmarks and simplicity. ASUS’ exclusive CPU Level Up feature, for example, delivers the best of both worlds, enabling gamers without much overclocking knowledge to ‘upgrade’ their existing processor’s performance to that of a better, more expensive processor with just a click or two. Speaking further, Sanka stated that this product will be imported on request MemOK! The World’s Only One-click Memory Rescue Tool Memory compatibility issues are often the bane of system upgraders, and ASUS is the only motherboard manufacturer in the world that has devised an ingenious tool solely to tackle memory-related problems. Called MemOK!, ASUS’ exclusive innovation takes the guesswork and anxiety out of memory upgrading, restoring user confidence and peace of mind. In the event of a boot failure after installing new RAM, all the user has to do is press an easily accessible button on the motherboard and MemOK! will automatically load the failsafe settings needed to ensure a successful system boot. MemOK! is able to rapidly detect and resolve memory issues-even if bad or unstable memory is used! amdphenomiinow.net amd phenom ii site amd phenom ii