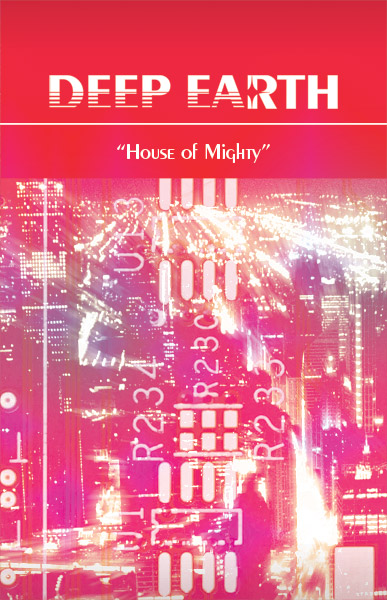 After feeling a little lost with the last Moon Glyph release, the excellent local labels newest release is back in my wheelhouse in a big way.   Sounding like a sister city foil to local space explorers Food Pyramid (whom they will be splitting a 7” with later this year), Chicago band Deep Earth created quite an impression on me with their new set on songs, the commanding House of Mighty cassette, their first on the label after self releasing some stuff in the past.

The CS is only four songs long, but each packs a punch.  The band meld together deep funk grooves, stormy synth flourishes and a fair share of sonic exploration.  What they lack in quantity they more than make up in quality, with three of the four tracks at or above seven minutes.  The shortest track, “Speak My Language,” is quick but urgent track, with squeaks and squeals and a pulsing beat driving the song forward.  There are two “title tracks,” which House of Mighty I & II, which combined stretch out over 16 minutes. The former a murkier sonic explosion and the later a lighter feeling track that feels a bit more spacey and ambient.  The tape is pulled together with the dark examination of vocal samples and sparse percussion of “Mantic Torch,” a track that is the most introspective of the bunch.

The tape, as a whole, is a trip that is sonically rich and texturally vibrant.  Like Food Pyramid, they throw a beat and grooves into their tapestries that make the songs much more than just noisy meditations, without coming across as cheesy or like they are more concerned with creating a dance party than making something of substance.  The songs feel organic and loose without feeling like they are meandering, and the just under 30 minute run time gives the tape pretty much infinite playback value.

Buy the tape from the Moon Glyph store and be on a lookout for a split 7” from Deep Earth and Food Pyramid in the near future.