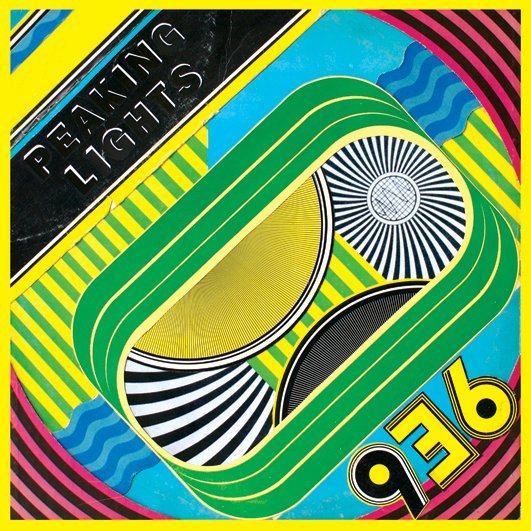 Sometimes an album can be immensely enjoyable be leave you lacking when you sit down to write what you like about it.  The new record 936 from Madison electronic outfit Peaking Lights is one of those records.  The album is chalk full of deep space grooves, with lush bass lines and synths that seem to seep in from outer space.  I have found myself lost in the ether more than a few times over the last week and a half, deeply immersed in the world created by the group on 936, and it is a space I plan on returning to many more times.

The songs have a decidedly overcast tone, with sinister beats and burbling electronics casting a haze over the poppy vocals and melodies, which in a separate context would make for straightforward pop album.  The songs feel like they were recorded after a weeklong ambien binge, with the bands chilled out vibes being infectious to the listener.  It is kind of the opposite of the Beach Boy affect, with 936 making you wish it was 3am on a brisk fall night. They venture out into slight, minimalistic dub on “Birds of Paradise (Dub Version),” but for the most part the album is a bleak pop record.  While the tone is dark, the record still has a strangely hopeful vibe at points, especially the pretty “Hey Sparrow.” From the opening dirges of “All the Sun That Shines” to the gurgling noise pop of album closer “Marshmallow Yellow,” 936 is a thoroughly engaging record that leaves distinct, open spaces where the listener can fill in with the unique dispositions of their psyche.

936 is an album that is immediate and direct in an elusive way, a record that you really like after one spin, but then it sounds brand new the second time.  It is a record that is not too ambient or evasive to lack character, but evasive enough that it allows for multiple listens and reinterpretations.  While some from the noise/electronic community will think 936 too mainstream and many casual music fans might find it a bit obtuse, I think it falls into that great middle ground where it can attract listeners from both sides of the spectrum.