We Went There: Whitney at the Triple Rock Social Club 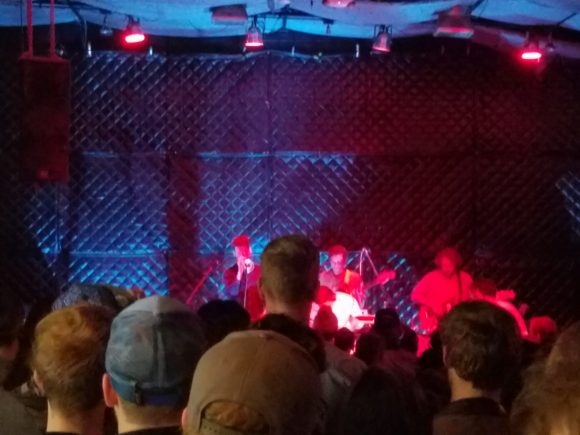 Sunday night at Whitney’s sold out show at the Triple Rock Social Club, I experienced what might have been the most subdued sold out show in the history of the universe. Despite the mass of bodies (you were fighting a crowd right from the entrance), the bands languid blend of jangle, country, pop and glam was met with the uber-Minnesota move of not showing much in the way of reaction of emotion. Even with a banged-up drummer (back issues), they sounded great, but it was hard to argue that standing in a crowded room hearing the music with a bunch of people scrolling through instagram (multiple people around me) was really something that delivered a knockout punch.

Where I was at in the back, people genuinely seemed to enjoy the brisk 40 minute set that covered most of their debut LP and a few of the new cover songs they just released, even if they stood in a haze like they were muscling through a corporate seminar. The band, usually a duo, swelled to six players for the set, consisting of two guitars, bass, keys, drums and a trumpet. The mini horn section added a cool punch to the songs, which really showcased the groups lush songwriting and stellar chops, fusing a mixture of genres into a sound that has deservedly got a lot of attention over the last few years.

As I was listening to their set (and checking my phone..busted), I couldn’t help but think that they are a quintessential headphone/home stereo band, with their smart arrangements and low-key vibes. Songs like “No Matter Where You Go” and “No Women” sounded great in the room, but the vibe screamed out for my couch and sweatpants, not couples awkwardly on dates shuffling their feet on sticky floors in a grimy punk club. I can honestly say I felt compelled to go back and listen to the record again after the set — based on the reminder of their solid if limited output — even if their live set didn’t set the world (or the crowd at the Triple Rock) on fire.