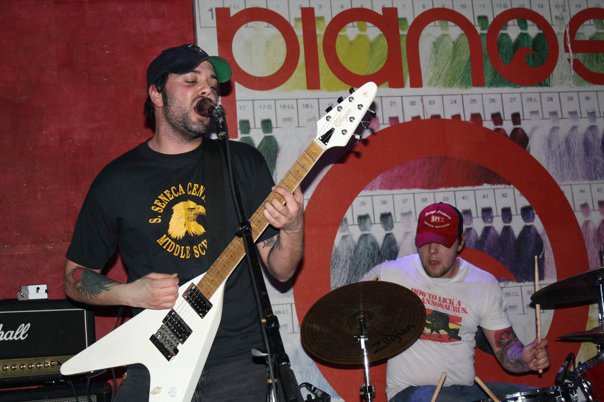 2/26/10
after a night in brooklyn sharing a futon with my bro and hearing a chick getting it put to her right and improper in the room next to us by a guy who looks like he thinks umphrey’s mcgee writes meaningful lyrics. we were well rested. the show tonite at piano’s was the best yet. so many people including many minnesota friends made it feel like a friday night at the turf. boytek also came up with the double chain beat down tonite. it horrified jess. right on dynamite brought it hard, red pens might be reaching a level that i cannot describe in words. afterwards we got our cash and me and max headed out to an afterparty for a play. i felt like the Gorch as i stepped into the building. we taught some guy about minnesota and how to wear your jackets right and proper. our friend who we are staying with is in her room with some guy who might be homeless. but maybe that’s like cool for here in Crooklyn. we be gettin criminal tonite. tomorrow we found out we go to New London. everyone has told me it’s a party. i like parties. oh yeah dusty gave me a whitewash tonite. that DUDE IS DEAD. CRO-MAGS DEAD
pictures will be coming again

CHILDREN’S HOLIDAY WISH LISTS INCLUDE DOLLS, LEGO’S, IPOD’S AND EVEN, IPAD’S, ACCORDING TO NRF.

It won’t be sugar plums dancing in children’s dreams this holiday season – it’s more likely to be video games, iPods and even iPads. According to NRF’s 2011 Top Toys survey, conducted by BIGresearch, popular holiday toys this year will be a mix of classic and contemporary. Continuing her reign, Barbie once again tops little girls’ wish lists (26.9%) and video games (11.9%) top boys’ lists. Additionally, Apple iPod’s appeared on both lists, and girls ranked iPad as a “must have” this holiday season as well.

“Holiday toy trends change like the weather, but one thing remains constant: children’s love of both classic toys and all things electronic,” said NRF President and CEO Matthew Shay. “With many retailers already offering a sneak peek at some of their Black Friday specials, parents who have hot toys and popular electronics on their shopping lists should start researching how, when and where to get their hands on these items before the most popular items become hard to fine.” For boys and girls, traditional toys like LEGOs, cars and trucks, and dolls remain top choices, but it’s hard for children to deny their love of bright and shiny electronic toys and gadgets. Apple iPod tied for eleventh with Disney items on girls’ lists and, came in at number 20 on boys’ lists. When it comes to tablet devices, girls have their hearts set on iPads, tying with LEGO and VTech Educational toys at number 20. site monster high wiki

Additionally, Elmo resurfaced at number eight on boys’ lists and number six on girls’ lists after having fallen out of the top 10 in recent years, and Monster High Dolls – characters based on their “famous” monster parents, such as “Frankie Stein” and “Draculaura” – made their list debut on girls’ lists, tying for third with Disney Princesses.

“From classic LEGOs to the latest video game station, children’s love for toys will never fade,” said BIGresearch Consumer Insights Director Pam Goodfellow. “This holiday season, parents will seek out items that their children can use over and over again, and maybe even pass on to a younger sibling in years to come, serving as both practical and thoughtful gift opportunities.” According to NRF’s holiday survey, 43.1 percent of consumers plan to buy toys this holiday season. this web site monster high wiki

As the world’s largest retail trade association and the voice of retail worldwide, NRF represents retailers of all types and sizes, including chain restaurants and industry partners, from the United States and more than 45 countries abroad. Retailers operate more than 3.6 million U.S. establishments that support one in four U.S. jobs — 42 million working Americans. Contributing $2.5 trillion to annual GDP, retail is a daily barometer for the nation’s economy. NRF’s Retail Means Jobs campaign emphasizes the economic importance of retail and encourages policymakers to support a Jobs, Innovation and Consumer Value Agenda aimed at boosting economic growth and job creation. www.nrf.com.