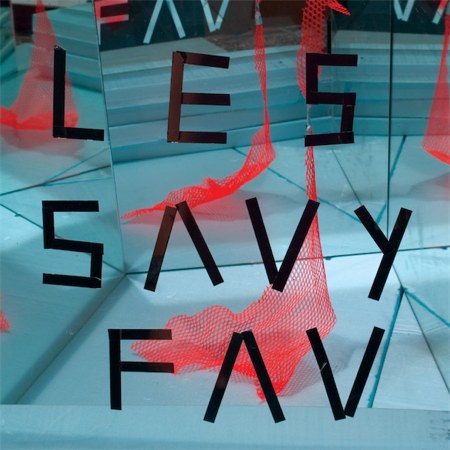 It can be difficult to gain a balanced perspective on an album after reading a single summary of the music. Bias can tilt a review, as can personal taste, history and just about everything else that is unique to the person writing it. So in an effort to offer an expanded perspective in such a medium, here are four reactions, four impressions, Four Takes on  Root for Ruin by Les Savy Fav.

Despite the baggage that often goes along with the “post-hardcore’ label (namely the “e” word), Les Savy Fav consistently manages to crank out galvanizing guitar-driven tunes that manage to avoid the histrionics often present in this sort of musical territory. Layers of nimble guitar lines soaked in reverb give the album a surprisingly lush feel, contrasting nicely with the band’s noiser inclinations. Anchored by a rock solid rhythm section that puts one in mind of Fugazi, Les Savy Fav makes sure that Root for Ruin is the kind of record that you haveto stand up to listen to. The album showcases some serious hooks with a surprisingly poppy bent for such an aggressive band which should get fans of newer acolytes like Japandroids looking through Fav’s deep back catalog. It’s not all instant gratification either, Root for Ruin’s lyrical content snaps with snarky wit and the band shows a knack for the clever turn of phrase that rewards repeat listening.”Excess Energies” is youth in revolt anthem that seems equally ready for the mosh pit and the indie airwaves. Les Savy Faveven finds their disco side on their ode/missive to LA “Sleepless in Silverlake”. While Root for Ruin is solid throughout, at a scant 11 tracks the album tends to whip by, the boys probably could have made for a more developed final product with more songs. The hooks are occasionally saccharine enough to merit the usage of that “e” word I mentioned, but when such obvious skill has gone into the album you can’t help but shout along.

Les Savy Fav’s new record is a bit of an odd beast – much like the band itself.  On one hand the band is still very much identifiable by their calling cards: arty punk abrasiveness and Tim Harrington’s clever quips, on the other much of the old Gang of Four/Clash influence seems to have been replaced by a debt to a younger band: Pavement.  Tracks like “High and Unhinged,” “Dear Crutches,” and “Sleepless in Silverlake,” drip with the early-mid nineties California slacker rock of the genre defining indie band.  And where LSF scramble the sound up with rhythmic twists and distortion, they actually come off sounding like a modern day take on one of Pavement’s primary influences, The Fall.  Of course while these influences show up clearly, they are still far from defining LSF’s sound.  Pavement never sounded this punk and the Fall’s guitars never quite this slickly produced  (at times the excellently layered guitar riffs actually resemble the ax gods of the hair metal era).

And this being a Les Savy Fav record it doesn’t simply stick to a formula either: outliers abound from the bizarre Velvet Underground sounding “Poltergeist,” to the anthemicpop-punk sneer of “Excess Energies.” The outliers take a little away from the record’s cohesiveness, but generally lead man Tim Harrington’s lyrical themes (the age divide, alienation, inevitable disaster) are enough to hold the shape together.   Overall I will probably prefer LSF’s older, more abrasive stuff in the long run, but I am happy to see that the shapeshifting band is still impossible to pin down.

Les Savy Fav is an interesting band and not just for singer Tim Harrington’s stage antics, I’m talking about the six year lay-off right at about the time when they should have taken over the world.  If the hadn’t taken the foot off the gas when they did maybe, we’d be living in a world full of decent rock band knock-offs instead of pretentious dance-pop wannabes.  Or maybe not.
Like a lot of people I hold the pretty clichéd opinion that Les Savy Favis great and entertaining live band, but no record I’ve heard has ever done much for me outside of the singles compilation Inches.  I never got around to 2007’s comeback album Let’s Stay Friends, but spinning this new platter I’d have a hard time imagine this isn’t a worthy follow-up.
Lyrically Harrington touches on a few topics that reminded me of the most recent Fall album  (and this was before I noticed the subtle Fall reference in “Dirty Knails”), namely growing old and wondering what-fuck-you-are-still-doing-in-a-rock-band, though Harrington seems to be for it on the album highlight “Excess Energies”, which skewers youthful rebellion and aging angst.  “Dear Crutches” kind of pushes a bit too much into the realm of sentimental indie-rock.  Seth Jabour is still indulging his Edge-fetish, which isn’t exactly to my taste but he mostly pulls it off. Tunes like “Clear Spirits” and “Poltergeist”, when the band messes with their standard template, the later reminds me of Suicide without exactly sounding like Suicide, which work the best.

Tim Harrington screaming “We still have our appetite” while guitars slash around and the rhythm section pounds forward as fast as they can. If anyone was worried about Les Savy Fav getting soft in their old age, the first track “Appetite” from their new album Root for Ruin should put that to rest. While I always thought they had a sound that could (and should) be appreciated be a bigger audience, Root for Ruin has the feel of an album that might finally get Les Savy Fav appreciation outside of their usual fan base. This isn’t saying that they have gone commercial, but the bright, punchy guitars of songs “Let’s Get Out of Here” and “Excess Energies” and Harrington’s wild man punk “singing” seem pretty in tune with what people are liking these days, which wasn’t always the case when the band has released albums in the past. Their first album in over five years is tight sounding with a loose feel, a fun album that still feels like a serious piece of art. I don’t know if it is my favorite album by the group, but any new album by Les Savy Fav is a good thing and Root for Ruin, if nothing else, should serve as a great introduction for new fans who have yet to discover this great band.