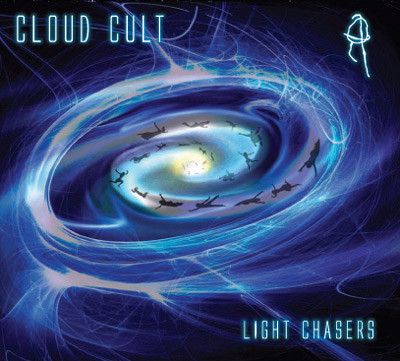 I once saw a grown man break down in tears at a Cloud Cult show.  True story.  It started innocent enough, with one tear trickling down his check, which his girlfriend dutifully wiping away, giving him a sympathetic look that seemed to indicate she was impressed with his sensitivity.  Then the waterworks kicked into full gear, with monsoon waves of tears pouring out of his eyes, suddenly making everyone around him very uncomfortable.  This guy, who was excessively drunk and was built like an offensive lineman, was crying so hard that waves of spasms were going through his body.  I share this story not to ridicule this guy, although it was kind of amusing, but to indicate the level of emotion that Cloud Cult draw out from their fans, which isn’t going to change much with their emotion packed new album Light Chasers.

For people who have made up their mind about Cloud Cult, Light Chasers isn’t going to sway you.  The band still relies on sweeping instrumentation and Craig Minowa’s emotive songwriting.  Their best albums were centered on the crushing loss of Minowa’s infant son, but the groups work never seems heavy handed or depressing.  Unfortunately for fans of Cloud Cult, Light Chasers is one of the group’s most uneven records and, while having moments of clarity and joy, comes across as maybe their weakest album yet.

The group brings the emotional punch on the album opener and closer (“Unexplainable Stories” and “There’s So Much Energy In Us”), but the middle 14 tracks are a bit of a mixed bag.  Highlights include the poignant “You’ll Be Bright,” the folky “You Were Born,” the bombastic “Room Full of People in Your Own Head,” the sweet and vulnerable “Dawn” and the stuttering, almost new wave of “Today We Give Ourselves to the Fire.”  Unfortunately the rest of the tracks are a bit of a letdown, which is weird for a band that usually has no problem filling album with great tunes.  Things get sticky when Minowa mixes in weird vocal effects (possibly the dreaded auto tune) on tracks like “The Exploding People,” “The Interference” and “The Guessing Game.” The other tracks seem to seep into the ether, neither pushing me away nor grabbing me, which is strange from a band I really like a lot.

Overall, this is the first Cloud Cult album where I wasn’t readily inclined to start it back over at the start when it ended.  When the band is “on,” they make some of the most emotionally charged, dramatic pop music of any band playing these days.  Unfortunately, Light Chasers isn’t their best record by far and finds their off kilter, experimental side muddying up the process to a point where I found myself hitting the next button more than I wasn’t.