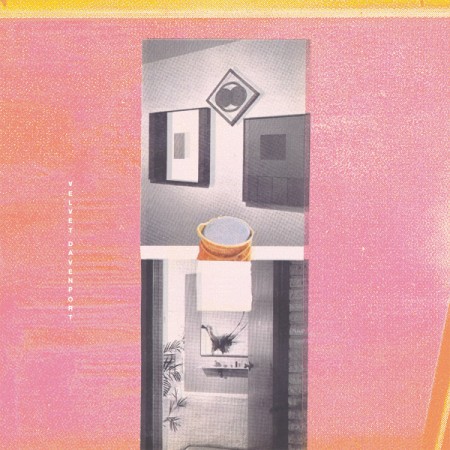 Parker Sprout, the frontman and creative force behind local pysch-pop group Velvet Davenport, has a songwriting gift I have seen before, but not often at the level Sprout seems to possess it. The skill? The ability to write pop songs that have the innocence of a child with the introspection and wild eyed wonder of an acid freak. The most endearing thing about the whole product, which Sprout has honed on multiple smaller releases and has superbly finessed on Warmy Girls, is that he doesn’t require synths, heavy handed guitar effects or any of the gadgets others use to shove their “retro” style down your throat. In fact, the lo-fi sensibility of the songs only goes to reinforce the sheer genius of the songwriting that fills the nostalgic yet forward looking gem of an album that is Warmy Girls.

The album honestly sounds like it could have been discovered in the dusty box from some West Coast commune dated 1968. The album starts out with the shimmering pop of the previously released “Mystery Micheal,” which along with “Warmy Personal Routine” served as the samples released prior to the album that helped pique such high interest in the band. Clocking in at 27 minutes spread over 12 songs on white vinyl, the record is the groups longest output yet, along with its most fully realized. Ranging from the darker, more somber “Druid Song” to the wistful “Lily Girl,” Warmy Girls is an easy album to get wrapped up into. Songs like “Run Faster Lady” mix insatiable organ runs, sugary sweet melodies and just rough around the edges productions that provide infinite repeat possibilities. The album could just as easily soundtrack your summer party as it could provide a sonic trip through your headphones.

The songs that Sprout and company arrange on Warmy Girls could easily succumb to pastiche or become tongue in cheek imitations, but to their credit they never even come close. The songs are confident without being pretentious, fun without being silly, well written without seeming over-thought. Capturing a spirit without being absorbed by an ideology, the album is a quick trip that seemingly pulls you in and spits you out before you even release it is over. Fans of garage/pop/psychedelic rock should heed notice. Velvet Davenport had stirred attention with their previous cassette releases, but leave little room for doubt of their resounding talent with Warmy Girls. The attention, and hype, probably will be pretty intense surrounding the band with this album, and it will not be without good reason.

While Cavanaugh enters his 25th season at Southern and Williams takes over the Bulldogs, Rossomando has the job of leading the Chargers back on to the field for the first time since the program shut down in 2003.

“You talk about taking it one day at a time, we really See Football, D8 have to take it one day at a time,” Rossomando said. “Take on every challenge, teach them to get over every obstacle and push through some tough times, which are going to come. That’s really what I’ve been coaching the coaching staff on for the last two weeks.” Rossomando, 35, comes over from the University of Albany, where he was the associate head coach. But he’s quite familiar with New Haven, having been an assistant for the Chargers from 1994-1998. And he’s ready. Rossomando said Wednesday it’s a mix of nervousness, anxiousness and excitement all bottled together.

New Haven opens up practice Tuesday and kicks off its season Sept. 5 at Lincoln University (Pa.).

“Everything we do right now is a challenge,” Rossomando said. “I think the biggest challenge is to sell guys on the building on a program. Not just come in and have instant success, but we’re in it for the long haul.” UNION HEADED TO THE BOWL Shortly after getting situated as Yale’s new football coach, Tom Williams greeted news that the Bulldogs play Ivy League rival Princeton in a preseason scrimmage with a sense of bemused astonishment. site lincoln university pa

It boggled Williams’ mind that Yale would face one of the teams it was competing with for Ivy League supremacy two weeks before the season game.

It wasn’t long before Williams replaced Princeton with Division III Union in its lone preseason scrimmage with the Dutchmen set to come to the Yale Bowl for a Sept. 5 exhibition game.

“I thought the Princeton scrimmage didn’t make a whole lot of sense in terms of playing an in-season opponent,” Williams said. “Even in the NFL the preseason games are against regional teams or non-divisional teams. For me, this will give us a chance to compete against somebody else and see how we do. I think it will work out for all the parties.” Union is no stranger to play exhibition games against Yale. The teams met in annual scrimmages in the 1990s and earlier this decade. The most notable development from the Union/Yale scrimmages probably came when returning 1,000-yard rusher Keith Price suffered a season- ending knee injury in the 1993 scrimmage. site lincoln university pa

CHALLENGING OPENER As he prepares for his 25th season at the helm of the Southern Connecticut State football program, Cavanaugh knows it won’t take very long to see just how good the Owls are this season.

He can thank an ambitious season opener against perennial Division II contender Indiana (Pa.) for that.

“I think we are going to find out relatively fast where we are at as far as a Division II football team,” Cavanaugh said. “They will present a big challenge for us. I guess it is better to play them better early than late.” IUP, coming off an 8-2 season with the two losses by a total of nine points, will play the Owls at 4 p.m. on Aug. 28.

The first-year Yale coach found himself at a loss to comprehend the murder of McNair on July 4 and couldn’t help reflect on his dealings with the former Tennessee and Baltimore quarterback both on and off the field.

“I think I was just like the rest of the football world, I was shocked about the events that took place,” Williams said. “I remember Steve being a gentleman, I thought he was a consumate warrior on the football field, he was a leader of his team and very well respected in NFL circles. I was just as shocked as anybody.” Chris Hunn can be reached at [email protected] Jim Fuller can be reached at [email protected]