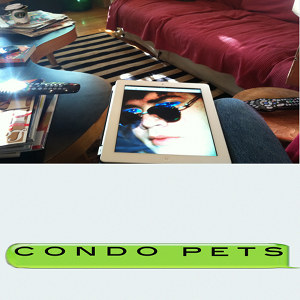 Like every buzz genre, the deconstructed chill pop sound that is gaining steam these days has bands that are not much more than johnny come latelys, cashing in on the popularity of the new style. Fans of the genre will know that James Feraro is not one of those guilty of cashing in, as he has been making outsider pop, with warped samples juxtaposing with smooth pop tunes for the quite a few years now. His forthcoming LP, Far Side Virtual, will probably bring him to a bigger audience, but he still is doing things his own way with his surprise release of a new EP called Condo Pets. You can listen to two songs from the EP below, the majestic, almost Disney soundtrack pop utopia of “Text Bubbles” and bright pop shuffle of “Eco-Tot” below as a free preview of the EP. Grab Condo Pets HERE and pre-order his forthcoming Hippos In Tanks LP HERE.