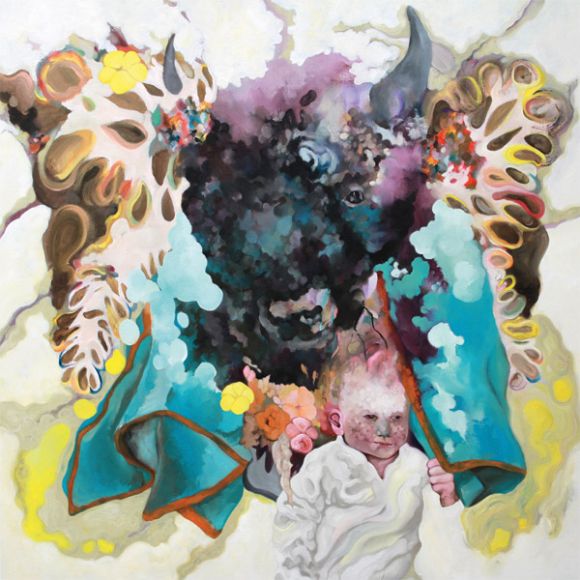 While I am guessing that maturation probably isn’t a goal that most bands shoot for, it is the theme that kept coming back as I have been soaking in the great new LP Selva Surreal from local five piece Buffalo Moon. Following their rousing debut Wetsuit, which introduced the bands Bossa Nova pop meets Stereolab vibe, the group has refined and polished their sound for their new Moon Glyph released LP. While maturity, especially in the music biz, can be a bad thing, it works out well for Buffalo Moon on the confident and commanding Selva Surreal, which expands the great work on Wetsuit and shows a band really building their sound.

The title of the record is translated to Surreal Jungle, an apt title if there ever was one. The songs on Wetsuit felt light and breezy, with a few extra drinks in the belly to loosen up the vibe. There still is a fun and flowing vibe to their work, but the sound is a little more psyched out and murky (in a good way), songs more complex and rounded out. It is almost as if the party left the beach for the night and waded into the dark, muggy forest, shedding their youthful naivety for a place deeper in the always turbulent psyche. Selva Surreal is an album that dishes out instant gratification on the first spin but wears really well, with new layers of the songs unfolding with each listen.

Fans of Wetsuit should not worry that the band has abandoned their sound, as Selva Surreal still has that core Buffalo Moon sound. Songs like “Amores Perros” “Kind to Me” and “VFW” sound like logical extensions to the material on their debut, with lead singer Karen Freire effervescent vocals (often in Spanish), bright keys and wah-ed out guitar washouts mixing together by the increasingly tight sounding band. Lead single “Chica de Luna” ratchets up the sound to about as catchy and funky as the group has gone yet and “Salt in My Mouth” fills the role of Beach Boys sounding beach-doo-wop track that Wetsuit highlight “Beach Boy” filled on their debut . The band slow it down to almost waltz like levels for the soulful, horn driven ballad “Temporary Problems,” which was one of the many moments where the band’s sound seems to be stronger and more concise as it has ever been. The group throw a curve ball with the Bowie does spaghetti western jam “Lonesome Hawaii Cowboy Blues,” which sticks out like a sore, albeit interesting, thumb smack dab in the middle of the record.

The group really flexes their muscle and shows their command and precision on the first three tracks on the back half of the record. “Trust Your Instincts” is a wild and turbulent bass driven bassa nova pop gem, a track that captures the group fun and loose sound, giving the feel that it is speeding so fast it may fall off the tracks, only to meld seamlessly with smoked out, murky, swamp funk of “Moses Baby.” “Moses Baby” is a rich and multi-faceted track that has a paranoid, funky groove that builds the tension within itself until local sax player extraordinaire Mike Lewis let loose a haunted sax excursion (one of two on the record, the other being during the smooth pop of “Rasberry Sorbet”). After the frantic “Trust Your Instincts” and the darkly hypnotic “Moses Baby,” the band launch into the sunny, glowing pop of “Main Man,” which might be the most buoyant track the group has done, with Freire’s vocals as confidant and commanding as I have heard.

Buffalo Moon really set the bar high with Wetsuit, but they have clearly outdone themselves with Selva Surreal. Their sound, both production and songwriting wise, have taken great steps forward. The songs have that elastic pop sound that has drawn the group so much attention but have a new layer of complexity to them that really flesh out their ideas. Selva Surreal is a step forward for the group in every possible distinction and show a group that started off great and are only getting better. The record drops on 10/25 and you can score it from the new look Moon Glyph website.

The band will be celebrating the release of Selva Surreal on Friday 10/29 at Hells Kitchen with a great lineup including Sleeping in the Aviary, Larry Wish and His Guys and Larva Ink