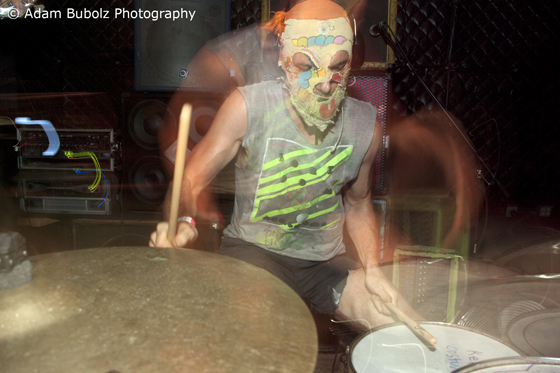 Brian Chippendale might be a little more known for his main band Lightning Bolt but since 2006 he’s been releasing solo records under the name Black Pus. After a handful of CD-Rs and a full length on Load Records in 2011, Chippendale has released the full length All My Relations on Thrill Jockey this year. Chippendale’s drumming and mask mounted microphone are pretty unmistakable here but Lightning Bolt co-conspirator Brian Gibson’s bass is replaced with a dizzying array of triggered oscillators and who knows what into a surprisingly melodic combination. “Black Pus In His Hilarious Attic” is a pretty good preview of what to expect from this one man show.

Black Pus plays at the Turf Club tonight with Seawhores and Slapping Purses for a cool $8.

Buy Black Pus’ “All My Relations” at Amazon