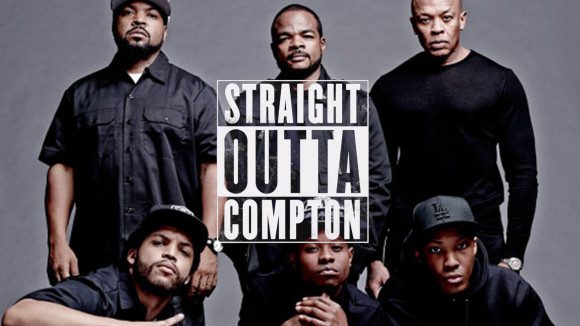 It can be difficult to gain a balanced perspective on an album after reading a single summary of the music. Bias can tilt a review, as can personal taste, history and just about everything else that is unique to the person writing it. So in an effort to offer an expanded perspective in such a medium, here are three reactions, three impressions, three takes on the movie Straight Outta Compton.

They maybe should have called this one “Straight Outta Hollywood.”  While “Straight Outta Compton” was a decent flick and fairly informative for those interested in the beginnings of NWA and “gangster rap,” it’s also formulaic and super corny. It also covers a huge amount of time and detail, and that necessarily means that there is really only time to cover things at a superficial level. So rather than a deep look into the various personalities that came together to form NWA, it’s really more of a series of events. Here’s the group recording their first song! Here they are on their first tour! Oh no, here they are dealing with some adversity! Next event, next event, next event. Even at 2.5 hours the movie seems hurried and the effect is that the formation of NWA seems spontaneous and their success seems to happen the minute they walk out of the studio.  Creating a phenomenon that changed the face of music has never looked so easy. Or fast! To make up for the film’s superficiality it lays the cheese on thick to make sure that the audience is feeling something. So plenty of feel good high fives and “we’re gonna be brothers forever” type stuff followed by the eventual flipsides – the feel bad moments. The film slows down at the end a bit and treats Easy E’s death with some of the detail it deserves (and it’s pretty heartbreaking) but much of the rest of the film could have benefitted from a similar deep breath. Of course then it couldn’t have covered the span of 8 or so years and end with Dr. Dre coolly informing a dopey-seeming Suge Knight that he’s going to form Aftermath Entertainment. I still enjoyed the movie but I think I would have enjoyed a richer story covering a shorter amount of time than what amounted to a 2.5 montage of major events.

There’s that moment in every Hollywood music biopic where there’s a really cheesy version of “artist stumbling into writing their hit song magical moment” that really bugs me. We’re treated to a few of these throughout the movie(Early on there’s a Eazy E going from not knowing how to rap to nailing the intro of Boyz-N-The-Hood within a couple minutes) but Straight Outta Compton rolls out one of the worst ones later on: Dr. Dre is sitting in his house trying to play a keyboard line to a beat he has and just as Snoop Dogg walks in, BOOM he hits the line to Nuthin But A G Thang followed by Snoop saying “let me try something” and the duo nails the beginning of the song. It’s those kind of moments I feel always cheapen what could be a serious movie and this film fills time with a bit too much of that along with also cramming in a lot of humor that doesn’t really make NWA seem that much like “The World’s Most Dangerous Group”. After a serious scene of being harassed by the cops outside the studio you see a very serious reaction of them go back and start recording “Fuck The Police”. However, within the next minute the members of NWA are dancing and laughing around the studio, losing any sort of impact of the setup. There’s plenty good to go along though. The recreation of NWA’s 1989 tour was done well as live performances (see the original on youtube) but unnecessarily split into 3 completely the same setups instead of just focusing on the Detroit riot performance.

Straight Outta Compton isn’t a bad movie but if you’re expecting anything more insightful than a standard rise and fall and redemption you’re going to be disappointed. The casting overall was done well with Ice Cube’s son in the standout role as Cube himself. The final scenes of Eazy E’s life are sad but by then you’ve endured a good 30 minutes of heavy handed setup with Eazy coughing whenever he’s in a scene. At 2 1/2 hours, Straight Outta Compton is more a collection of scenes covering 10 years of Eazy E, Ice Cube and Dr Dre than it is a real telling of the rise and fall of NWA.

At over two and a half hours, Straight Outta Compton covers a lot of turf, for better and for worse. At its best, it tells the story of this amazing group and their rise to superstardom, highlighting the police brutality that still is simmering in our country and how these five reacted to their reality with their groundbreaking music. The movie was most alive when highlighting the tension of the constant police harassment, addict poverty and endless crime and violence that served as the subject matter for their songs. When we get to the scenes of their music resonating with a wide audience and the police and other establishment figures pushing back, it is impossible to not understand how and why NWA came to life, and why their music told an important part of a often ignored reality of millions of Americans. The concert scenes were outstanding, and the soundtrack throughout highlighted how much classic music was created by the group and their solo work.

At its worst,  it almost comically crams in so much info (hey, Snoop just randomly freestyled “Nothin’ But A G Thang” on his first try; hey, making a seminal album like Straight Outta Compton is easy!; hey, speaking of easy, starting a record label is a breeze; hey, there is Tupac at the moment Dre casually gave him the music for “California Love”). For a story that stands on its own two feet and doesn’t need a Hollywood gloss, it felt like the producers got a bit ahead of themselves in wanted to tell a decade long story in 150 minutes, with loose ends tied up and the narrative arc featuring no deviations from an easy-to-digest story they crammed together (there also is the concern about the portrayal of women in the movie, along with the papering over of some of the less-than-savory moments the group had with women in their rise to fame). The glossiness also bleed into some of the scenes that felt, because of lack of time to dive deeper, wildly oversimplified and dramatic in a way that wasn’t genuine. The movie overall was enjoyable and covered a subject worthy of examination in a fashion they was easy to digest and well put together, it’s just too bad that the final product felt like a unwieldy amalgamation of different jumping off points, not a concise story of what really happened.