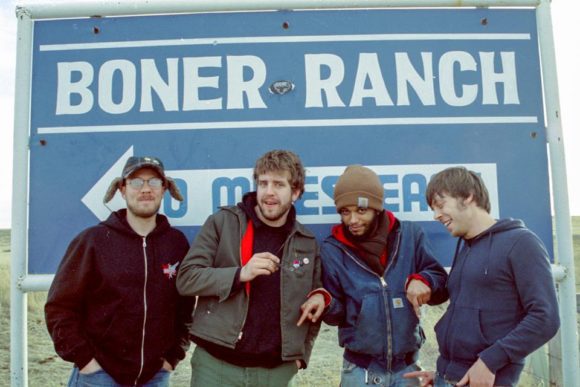 In honor of upcoming albums, Back Catalog takes a look back at a brief look at everything leading up to it. In this installment, Adam takes on one of his longtime local favorites’ reunion with a little write up of everything with a few personal stories and some photos from his archives.

Falcon Crest was a band that existed from somewhere in early 2000s until somewhere around 2011. They were extremely loud. Members of the band play/played in Signal To Trust, Total Fucking Blood, STNNNG, Raw Space, Polica, Low Forms, Charles De Gaulle and a bunch more of the best local bands of the last decade. Here is part of their story.

Perched Up Mt. Stab 7″ (2003) – The first 7″ contains 4 songs, a multi page book of the lyrics and illustration and 2 Falcon Crest crayons so you can color things once you hear the bird sound to turn the page. “God Grades On A Curve” and “Perfectly Meager” sound wise are pretty good early indicators of where the band was working to. “My Big-Ass Spacebook” sounds like a band from the 90s I can’t really think of what. “Agoraphobia” is Falcon Crest with more late 90s emo chord changes. I am also a poser who just got this record yesterday.

Track Recommendations: the whole thing is like 8 minutes if you can find it 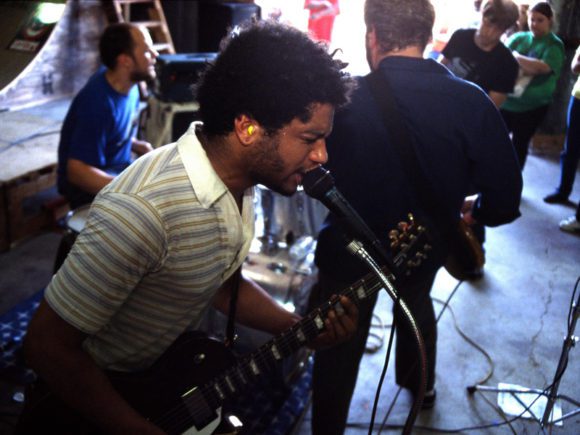 Taste The Thunder Raise The Flag CD (2005) – The solitary full length in the catalog up until now even though it barely cracks the 20 minute mark in length. Between the first 7″ and this the band really tightened up on some of the Hot Snakes etc. influences and there’s plenty of cool guitar interplay. There’s also an untitled reggae interlude in the middle which currently ranks as the #1 track on the band’s Spotify page. “Crack Axeman” has a clapping part I never got the hang of and once in Milwaukee I played 3rd guitar on the noise part at the end and fell off a bar. There are no videos of that. This record is on Spotify so you can listen to the whole thing.

Track Recommendations: Suture Self, Crack Axeman, Today I Feel Like A Real Witch 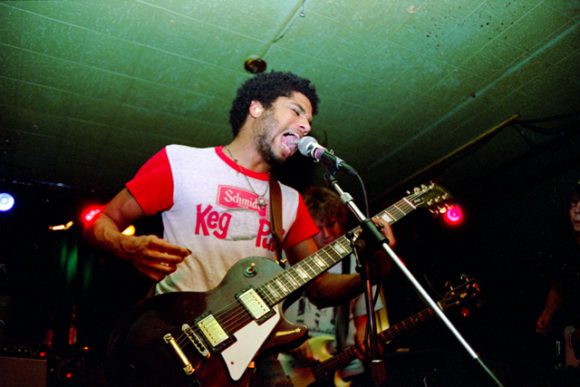 Falcon Crest / Comedy Of Nils & Noodles split 7″ (2006) – “Hey. Do yourself a favor, don’t flip this record over” begins comedian Nils Lindahl’s minute of Falcon Crest related insult comedy. Nils’ insult comedy was a staple of shows for a short time in the mid-2000s and if you can’t get someone to do a split 7″ with you of insults, why bother? Noodles laughs and that’s all you really need to know about side A. The Falcon Crest side gives us a quick pair of songs. “The Politics Of Everything All At Once” sounds a bit Nirvana dirge mixed with classic AmRep while “In Tents” is a minute and a half of fury, gang vocals and some great lead shred at the end.

In late 2005, Pete asked me at a party what I was doing in January. I worked a lousy job and had a bunch of vacation time so I joined the band on their 2 week January 2006 tour to Denver and back. This was still 9 months before my first digital camera so I shot 6 rolls of film over those weeks, the highlights you can see here. We saw all the sights including the above pictured Boner Ranch, the Corn Palace and only one sled hill with enough snow to make the sleds we hauled in the van worth it. There was also a case of champagne along which we drank from everyday, forever making every tour I was a part of after that not as cool. 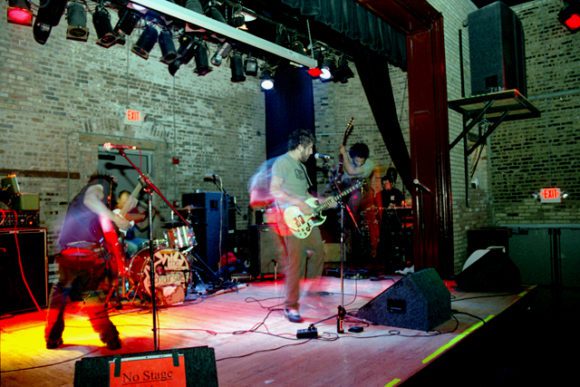 Medievel Arms was recorded in the late 2000s and Falcon Crest stopped playing shows sometime around 2011. Thanks to Dan Davis that this is finally seeing the light and I can finally listen to my favorite songs that I heard every night for 2 weeks straight in 2006

Falcon Crest reunite tomorrow night (6/11/16) for one very special release show at the Turf Club with STNNNG, Skin Of Earth (IA) and United Teachers Of Music. Medieval Arms is available from This Ain’t Heaven Recording Concern. There’s a photo of Falcon Crest on the Turf Club wall if you look so you know this is a big deal.