They are ancient and the are modern; they are dark and they are light; they are loud…well…

It shouldn’t be much of a surprise for me to admit this, but I love heavy metal. The volume, the riffs, the narratives – everything about heavy metal appeals to my sensibilities in the most profound of ways. Rock-and-roll’s cool younger stoner cousin, heavy metal tends to ride that fine line between catharsis and ridiculous. It’s very easy to miss your mark and go full-on clown shoes (Bongzilla); but if you’ve got the stones, you can blaze along catharsis like a comet (YOB). Some folks can ride the thinnest of lines somewhere between and chuckle about it (GWAR), while some just fully embrace catharsis and dedicate themselves to an existence as earnest purveyors of dread (Harvey Milk). Then there are the cats that just want to fucking rock, like Nightosaur.

Nightosaur are steeped in the traditions of rock-and-roll but harness a particular fire that burns just a little too hot for the ol’ three-chords-and-the-truth motif that gives rock-and-roll its conscience as well as its balls. For every Testament chorus, there’s a Tom Petty bridge. For every Thin Lizzy duel lead, there’s a Judas Priest drum fill. Nightosaur have crafted a sound that is truly out of time, like the old Universal monster movies:

‘Are we living in a postmodern world?’
‘Well we must be, because I see cars; but there are also gas street lamps…‘

And for once (FOR ONCE) I can enjoy a contemporary heavy metal group without artifice: no masks, no proselytizing, no ridiculous tunings, and no goddamn recycled riffs. It seems to me that just about every “heavy metal” band I’ve come across over the last ten years own the same two Black Sabbath and Goatsnake albums. I’ll let you be the judge of which ones; but remember that there is a correct answer.

What make Nightosaur so interesting is their versatility. All members involved are incredibly capable players. For fuck’s sake, guitarist Andy Webber built his and bassist John Henry’s guitars himself (Whalehazard – a self-made band if I’ve ever known one). And the drums, let me tell you: Brad Schwab doesn’t keep the beat trenched in the mud, lazily plodding his foot and gifting us with a crash/ride trade up every eighth beat; no – he contributes to the songs like a musician. I know…weird, right? My point, more or less, is that Nightosaur are a great band. Webber and Henry fluidly push and pull their guitars through Schwab’s gymnastic drums and the results are bewildering, to say the least.

Their 2014 LP release, Set Fire to the Mountain (Tuff Tymez Records), found Webber, Henry, and Schwab stretching  into even more progressive territory than their previous compositions. Which isn’t to say Black Blood of the Earth (2011) and Spaceaxers (2012) aren’t fucking heavy and weird. No one would deny “K.H.O.K.M.” its dignity, no one would dare. But Set Fire to the Mountain was definitely a step in a different, albeit familiar direction. 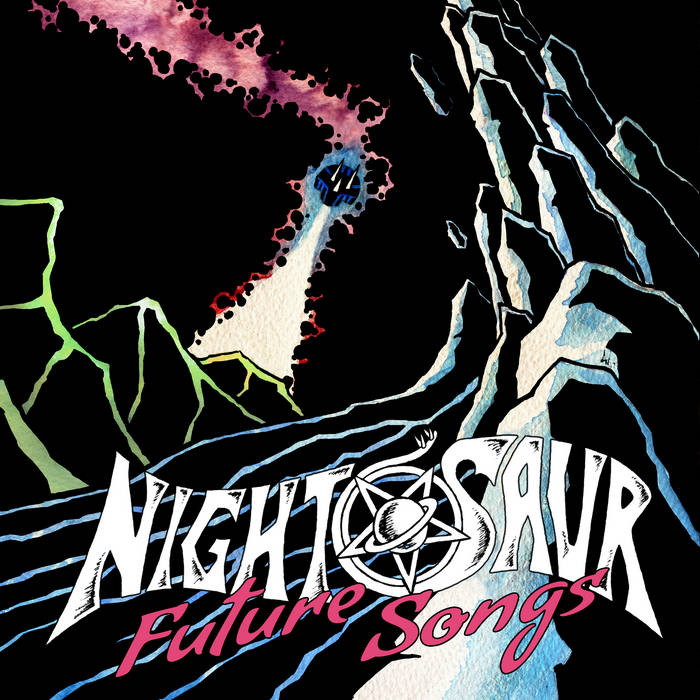 Future Songs is the payoff for that exercise, lean and mean and to the point, but still with its fair share of schlubby charm.
Within these four new epic songs, Nightosaur have grown the conceptual elements of their work without resigning themselves to conceptual artistry. They have decidedly honed their songwriting skills without sacrificing the whimsy of improvisation. And most importantly, they have managed to stay heavy without dialing down their sound.

Usually when one of their peers trades a distortion pedal for a naturally rumbly instrument the results can be lackluster; but, again, Webber literally crafted this sound, so it’s fucking sweet. His Whalehazard Andromeda crunches and cries and crushes with righteous fury. Henry’s Whalehazard Nebula bass swells and pulses with effected precision throughout the four song set, grinding when he needs to grind and noodling in the grand tradition of Geezer Butler and John Entwistle when inspired. Henry understands the vibe, and understanding the vibe is what makes or breaks a band. Again. Nightosaur are a great band, and they have stayed great even without singing about the devil.

The tunes on Future Songs are epic bursts of prog-metal woe, wisdom, and wondrous wandering. “WIth the Rain”‘s dreamy intro quickly swirls into focus before setting the pummeling precedent for the rest to come. “Follow Me” offers the most obvious head-banging chorus, and “Doing Me Wonders” burns down the damn building with its majestic coda. But “Millions of Bees” has burrowed its way into my head and I have been singing/humming the refrain to myself for a good month now. The best rock-and-roll moves your feet along with your heart, which is to say that Nightosaur have made some damn fine rock-and-roll.

Make sure to count yourself amongst the lucky 100 Nightosapiens who will get a cassette copy of Future Songs Monday, October 23rd at Memory Lanes. Black Sam Malone, Deep-Sea, and Wax Lead will make the event a true party. Music starts at 9:00 PM(ish). Do yourself a favor and get addicted to “Millions of Bees” beforehand by checking out the link below.