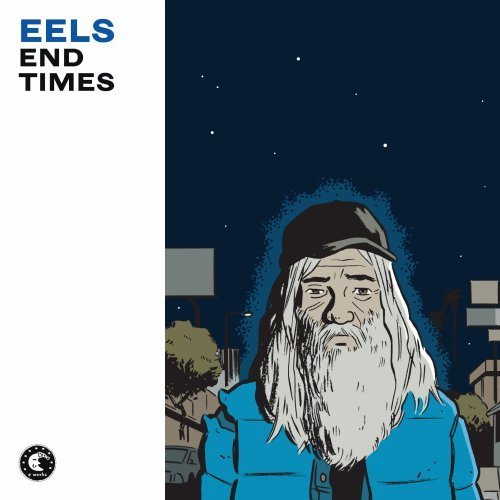 Reading Mark Oliver Everett’s (better known to music fans simply as E) autobiography recently, Things to Tell the Grandchildren, I was struck at how music can be a powerful source in people’s lives. He goes through the process of using music as self therapy as he dealt with a pretty crushing string of events in his life. His great albums, especially his classic Electro Shock Blues, all revolved around the loss of three family members within a few years of each other. The songs always had a dark cloud hanging over them, with a tint of hope. In the book Everett describes the many times he felt like losing hope, but always found something to keep him going, and it often involved diving into his music.

When I first heard his latest album End Times, which was written in the shadows of his divorce from his wife, I had two extremely conflicting thoughts. The first thought was “Damn, this guy can’t catch a break.” The second, and extremely more selfish thought involved something along the lines of being excited because I had heard time and again what pain and adversity had done to drive him to create some of the most poignant, emotional music of the last 15 years. I know, I know….pretty selfish. Unlike many of his previous albums, the record is a pretty stripped down affair that finds many of the heartbreaking songs featuring not much more than simple acoustic guitars and Everett’s haunted voice. The timbre of the record starts out overcast with album opener “The Beginning,” which sounds like a gloomy doomed remake of “Wonderful Tonight” and pretty much doesn’t look up from there. While many of his older albums seem to find at least a little hope to salvage from his despair, End Times seems to be the work of a man who is letting his sadness wrap around him like a blanket. On the crushing “In My Younger Days,” Everett sings that “I don’t need any more misery to teach me what I should be.” Other highlights on the album include “Mansions of Los Feliz,” the devastating “I Need a Mother” and the folky “Nowadays.”

Intense sadness is not an emotion that many people look for when they search out new music. Maybe it is a genetic deficiency I have, but genuine, heartfelt music like Everett created on End Times is to me about as good as music and art truly get. Many songs you hear from various artists seem to weave a tale that is sad in nature but is resolved in short order. Perhaps to counter the harsh realities of life, where many times the outcome to a situation is not in line with how reality works, many of the most popular movies and music set up the viewer/listener with an easy to digest narrative arc. A problem is presented, there is turmoil which seems insurmountable, and finally there is a resolution. Nine times out of ten the resolution is at or near the top of the list of best case scenarios. Luckily there are artists out there like Mark Oliver Everett who create albums like End Times that not only capture, but exemplify, the fact that sometimes life just frankly, sucks. I hope for his sake that one day Everett finds a calm and steady rhythm to his life, but until then, we will sheepishly feel lucky to be able to enjoy hearing the great music he creates out of life’s hard moments.