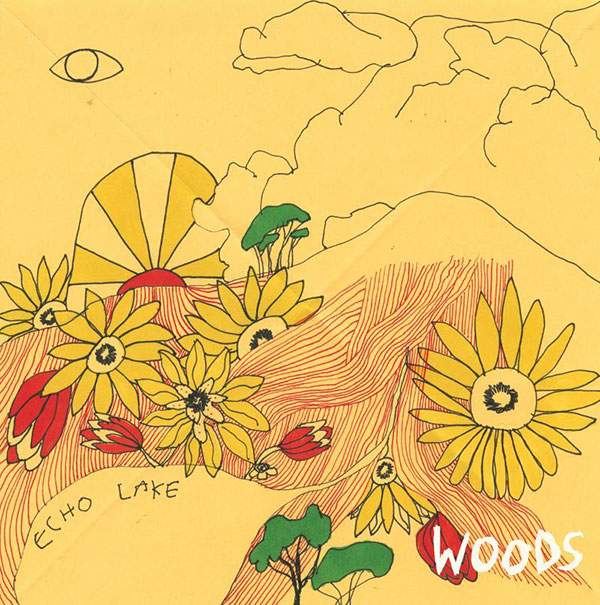 It is becoming more and more prevalent for indie bands to reference classic rock bands, but I still think the fact that Brooklyn band Woods reference the tied died, woodsy (pun intended) strain of Crosby, Stills, Nash and Young still does set them apart. C, S, N, Y aren’t exactly Bowie, The Talking Head or the Stones as far as generally being accepted as cool cultural stepping stones. Following up their amazing Songs of Shame LP, the group is back with their latest LP on their own Woodsist label, the equally great At Echo Lake.

Like Songs of Shame, At Echo Lake comes across as a classic rock cover band playing acid soaked folk rock through damaged speakers. While the songs are pristine and well thought out, the sound the band cultivates is much more in line with some of their label mates who work hard to make their albums sound “lo-fi.” The simple and sweet melodies and fragile vocals are mixed with haunted backing noises and walls of sounds feedback to create a sound that has one foot decidedly in the past and one foot in the noisey, arty future. With songs like album standout “Time Fading Lines,” they could play it with crappy children’s instruments in an echo y airplane hanger and it would still be a powerful statement. The song sounds like a quiet hymn, equally parts optimism and regret, aided by Jeremy Earl’s stunning falsetto. When he sings “In an hour or so, I’ll let you know,” you know that whatever news was going to be passed along was going to hit like a ton of bricks. The homespun and organic lyrical content could make them sound like a cookie cutter folk band, but the group, aided by a band member and resident “tape-effects technician” G. Lucas Crane, never sound boring or predictable.

My worry with bands like Woods are that they are going to be missed because they lack the characteristics to easily lump them into a category. They could be too weird or space-y for more straight laced fans and the hushed melodies and song arrangements might make them too accessible for noise rock fans. This is too bad. The band are creating a sound that not many other bands are attempting and creating it at a very high level. Hopefully their classic rock meets noise sound will catch on and people will come to find what a great record At Echo Lake really is.