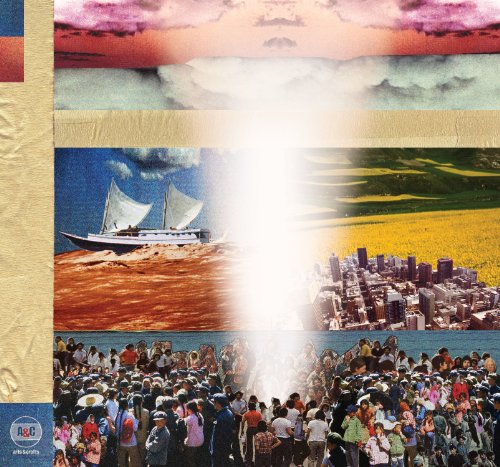 It can be difficult to gain a balanced perspective on an album after reading a single summary of the music. Bias can tilt a review, as can personal taste, history and just about everything else that is unique to the person writing it. So in an effort to offer an expanded perspective in such a medium, here are four reactions, four impressions, Four Takes on Forgiveness Rock Record by Broken Social Scene

Toronto’s indie juggernaut Broken Social Scene makes a shift on their fourth record.  Stripped from a dozen or so band members, to a core of Kevin Drew, Brendan Canning, Justin Peroff, Charles Spearin, Andrew Whiteman and recent additions Lisa Lobsinger and Sam Goldberg. Even with less members their sound remains huge and multi-layered.  They also brought in John McEntire, the veteran Chicago producer and multi-instrumentalist best known for his work with Tortoise.  McEntire is a complex arranger of vintage electronics; here he’s more sedated, yet still more rich in layers than former BSS mainstay producer Dave Newfeld (who helmed their previous 3 albums).   The stars here are Drew, Canning and Peroff, although there’s the expected assist from the fab trio of Feist, Emily Haines (Metric) and Amy Milan (Stars), who show up on a couple tracks, as do ex-Death From Above’s Sebastien Grainger.   There are definitely magical moments on Forgiveness, but they don’t knock you over the head, rather they seduce with each listen.

The soaring opening track “World Sick” with its cascading guitars is the sort of post-rock pop that we expect as Drew’s frustration with the status-quo is expressed with the lyric “I get world-sick every time I take a stand” before climaxing with a blissful orchestrated symphony of guitars.  The shambling “Texico Bitches” features Pavement’s Spiral Stairs. Standout “Forced To Love” captures the essence of the band as Drew  says “If I think about it, am I cool yeah”.  “All to All” is an ambient, trance like bit of electronica that hints more at a Metric b-side than BSS.  Guitarist Whitman takes the lead on  horn-filled, spirited romp of “Art House Director”.  “Highway Slipper Jam” finds drummer Peroff  taking over the lead vocal, draped in whistles, slide guitars, and synthesized drums.  “Sentimental X’s” gets an assist from BSS all-star female team Feist, Milan and Haines. The same trio is also on electro run through “Chase Scene” where Drew does a great Andy Gibb.  There’s the elegant “Sweetest Kill” and the quiet strummer “Romance to the Grave”.  Bassist Canning aces the lead vocal on the Pavement inspired  slacker hit “Water in Hell” with backing vocal from Grainger (ex-Death From Above 1979). Canning states  “the shuck and jive, the shuck and jive is over”. He could very well be talking about hustle of the music game/politics,  relationships within the band or both.

Although it takes awhile to resonate,  there’s a quiet beauty in their indulgence.  Forgiveness Rock Record is a early contender for Album of The Year.  Never a band to make singles, they are the essence of a album band, albeit one with various personalities.  BSS are at their best when they ramble on shimmering jam sessions with sprawling anthems like the soaring “World Sick, “Forced To Love”, “Water In Hell” and the gentle seduction of “Sentimental X’s”. Their only Forgiveness may be the grandness of their ambition.  There’s Forgiveness between all of its lovers, ex-lovers and friends.

Like many others who cut their teeth on independent music in the early 00s, You Forgot It In People was one of the most rewarding album-listening experiences of my life, and remains in consistent rotation in my music collection to this day. In fact, I would go so far as to say that not until that record did I think it was possible for indie rock to sound so collaborative rather than personal, communal rather than introverted, and bombastically raucous rather than meek and modest. So I’ve been waiting patiently since 2005’s solid-but-not-masterpiece self-titled record tried to follow up the blissed-out perfection of their breakout long-player. Was it worth it? My gut reaction is “kind of”, but I’ve only had a week with it, and my hesitation is making me wonder if it will grow on me. I also wonder if hearing the powerhouse awesomeness of lead singles “World Sick” and “Forced to Love” made me not patient enough for some of the more fragile (never thought I’d write that word in a BSS review) tunes like “Highway Slipper Jam”. Then again, the swirling keys and gorgeous vocals from the superstar female trio of Emily Haines, Leslie Feist, and Amy Milan in the epic “Sentimental X’s” reminds me of how some of the more understated older tracks like “Lover’s Spit” were just pleasant at first, then soon became a favorite. Ultimately, only time will tell, but maybe that’s for the best: sometimes the most satisfying albums are the ones you feel inclined to spend time with, to make a part of your spring and summer, rather than just hoping for big hooks to satiate your immediate needs.

Broken Social Scene will always be masters of complex and layered instrumentation, but I’m not sure it works to their advantage this go-around. While this band will forever be one of my favorites, it’s hard to not acknowledge their slow progression into a more mature jam-band which works wonders during their live show, but bogs down a good chunk of their new album, “Forgiveness Rock Record.” I find myself begging for at least some type of tangible structure so I can remember a melody like every song on their magnum opus, “You Forgot It In People” purveyed. But I think I’ve missed the boat here, because no matter how badly I want to love this album, I’m unfazed by the end product. All the ingredients are here: lush singing from a finally reunited band after several years, incredible technical skills, and a sense of undeniable rhythm. Unfortunately, they don’t reach that blissful peak that songs like “Shampoo Suicide” or “Stars and Sons” pulled off years ago in their prime.

This isn’t to say there aren’t some brilliant tracks on the album.  Everything hits classic BSS with triple-billed track “Sentimental X’s,” when Emily Haines croons in her typical affair as Amy Millan and Leslie Feist provide backing. No surprise here that the strongest tracks come from the female vocalists on the album as they have always been more captivating and explains why their side projects are so well-received compared to the guys’ solo efforts in past years. “Chase Scene” is a deeply concentrated, shorter track, with driving piano chords, and a progressively powerful chorus from much of the band. It has a funk anachronistic with today’s age and the classic horns chiming in towards the end of the tune help in solidifying the style.

Maybe it’s a grower, but considering I wasn’t taken aback by the first single, “World Sick,” released a few months back, I can’t help but be somewhat disappointed. Time can only tell, but for now I’m going to get reacquainted with their older material.

Logicians since Aristotle have warned against an informal fallacy known as “composition” which leads one to transfer attributes or characteristics from the constitutive parts of something to the whole, e.g. “New York Storiesis full of great actors and directors, therefore the movie will be great!”  Wrong.  Nowhere is this fallacy demonstrated more easily than with regard to rock “supergroups,” for whom the whole is almost always less than the sum of its parts.  (If Jack White could only figure this out.)  This makes it all the more astounding that Broken Social Scene is able to do what it does, pulling together a diverse cast of artists and producing a singular and coherent work of art that transcends the solo work of any of its members.

Forgiveness Rock Recordis Broken Social Scene’s fourth and finest album and will prove to be one of the best albums of the year.  While it has all of the hallmarks of previous BSS projects – sonic ambience; dense layers of simple, interweaving lines; slowly swelling choruses; and symphonic instrumentation, including full strings and horns – in the end FRR sounds as much like a pop-rock record as it does a post-rock record, and that’s a good thing.

The album has a bright, summer-sunshine feel that comes through from the first track – the inappositely titled, swelling anthem “World Sick.”  And though not normally known for their catchy tunes, just try to get the bouncy “Texaco Bitches” out of your head after a few listens.  Emily Haines makes the most of her turn, adding a melancholy counterpoint with “Sentimental X’s.”  The album is loaded with unique tracks that somehow cohere from beginning to end, though you’ll have to determine for yourself why it concludes with Kevin Drew tenderly singing about the joys of onanism in a sweet ode to his own hand.