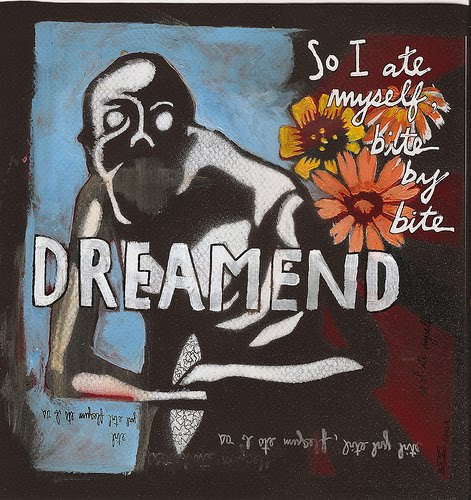 I have always been a tepid Black Moth Super Rainbow fan.  Not that I didn’t like them, but I was never completely won over, which makes it so weird that I have loved the solo work of the artists who make up the band.   First was the manic, wild eyed instrumental glory of Tobacco.  Next was the Vicodin lullaby of Seven Fields of Aphelion.  Now comes the strangest yet, at least in regard to sounding so different the sound that BMSR were known for.  D R E A M E N D is the name of BMRS member Ryan Graveface, who by leaps and bounds makes the least sounding BMSR record.  I had to check a few times to make sure that “Magnesium Light,” which comes off the groups recently released album So I Ate Myself, Bite by Bite,  was by D R E A M E N D and that the band was in fact related to BMSR.  While the band’s name and song title fit into the general aesthetic of the group’s existence, the Sufjan Stevens like gentle banjo and distant but sweet vocals of the track couldn’t farther from what I expected to hear when I hit play.  No matter if it didn’t match up with what I was looking for, it is still a pretty solid track that makes me hope the BMSR crew will just stay separate and keep pumping out awesome albums.