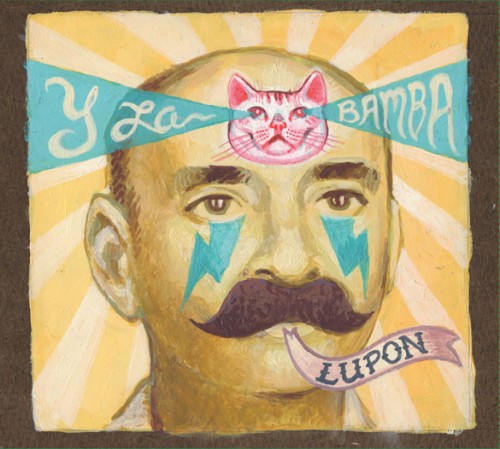 Creaky fret changes, droning fuzz, and an overall hushed intimacy open up “Monster” the lead track of Portland septet Y La Bamba’s first studio record (and second overall), Lupon.   And despite picking up the pace quickly afterwards in pop-centric “November,” the record’s overall climate of profound closeness never really opens up.   Even when lead singer Luz Elena Mendoza is fronting a multi-instrumental rock jam her vocals tend to feel like they are part of a confidential, one-sided conversation.  And that’s not a bad thing – Mendoza’s discretion, formed around her velvety smooth jazz alto, serves exquisitely to heighten each song’s folky charm. “Festival of Panic,” particularly shows off Luz’s vocal talents as she navigates wobbly vocal flourishes like a female Antony Hegarty.

And despite its large size the rest of Y La Bamba isn’t exactly a rollicking band of jammers either.  Every musician plays a distinct, precise part of the larger whole. From accordion to theramin, each instrumentalist follows Mendoza’s example of reserved sobriety.  And when the band comes together the result is oftentimes lush and fully fleshed out tunes, which pad their indie/folk aesthetic with a worldy blend of international influences.  Mexico particularly, it would seem, plays an important part in Y La Bamba’s façade (and not just because of the Spanish name). Mendoza is the progeny of Mexican immigrants and derives a great deal of inspiration from Mexican folk tunes.  That influence, however, seems to have been slightly tainted with the sounds of Western Europe.  The accordions, for instance, echo a bit of French, Bal-Musette style, and on tunes like “Winter Skin” and “Isla De Hierva Buena” (“Island of Good Herb”) the guitar sounds downright Andalucian.  All are welcome additions in a melting pot of sound that blends expertly under the production of The Decemberists’ Chris Funk.

Lyrically Mendoza doesn’t stray widely from the traditional folk canon of themes/images, but even so, fills her palate with rich textures that generally agree with the musical flow.  Her issues of religion probably make for the most stirring concepts – notably her musing on the idea of living in sin on “Monster” or losing one’s faith on “Juniper.”   Strangely enough for a daughter of Mexican immigrants, Mendoza actually sounds more comfortable singing in English than Spanish, with the record’s sole Spanish offering “Isla” sounding almost like the over-enunciated syllables of a non-native speaker.   Still, whether vocalizing them in English or Spanish, Mendoza’s lyrics always feel heartfelt, and whatever worldly influences the band takes on, they firmly make them their own.  Lupon isn’t a perfect record, by any means, but it’s a very promising debut from a band that sounds like it has the talent to go much further.