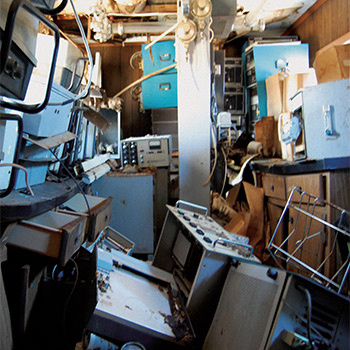 My first experience with the young east coast band Big Troubles was their stripped down songs as part of the Fader Fort  Youtube series and showed their sharp songwriting chops.  While the ability to write catchy songs is well and good, it won’t do much to separate you from the pack in the crowded indie rock world in 2010.  Luckily for the band their debut record, Worry, fuses their classic songwriting sound with a perfectly abrasive, blissed out shoegaze sound and create one of the most arresting debut albums of the year.

Starting with the My Bloody Valentine haze of “Video Rock,” the album is a great mixture of pop hooks and razor wire noise that keeps the songs from becoming too twee.  Tracks like “Creeper” and “Modern Intimacy” have a feeling like you are being sucked into a noise vaccum and kicked in the lungs by robot drums.  The tracks that have been used to preview the album, “Bite Yr Tongue” and Freudien Slip,” are unsurprisingly two of the most poppy tracks on the record.  “Slouch” might be the best mix of the two worlds, with slashing guitars and unrestrained drums melting over some great pop hooks.

Worryshows a group creating something that sounds both intimate and massive.  The songs fall right in my wheelhouse, with just enough edge to to scuff up the pop and just enough melodies to position themselves above the noise.  While the album came out in the last quarter of the year, it has wasted little time climbing the list towards being one of my favorite records of the year and is a exceptionally great debut LP.