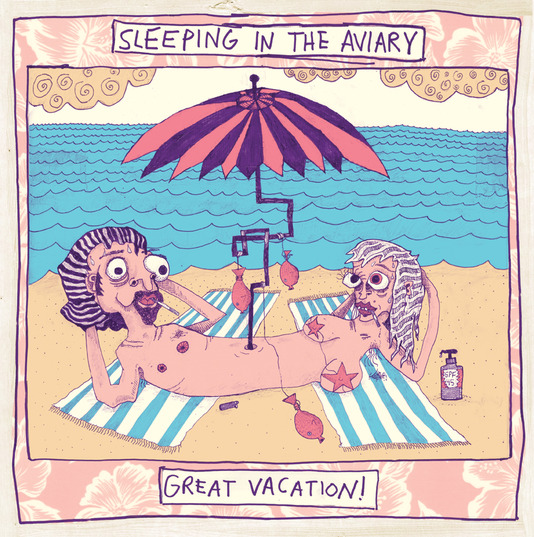 I first heard Sleeping in the Aviary on their sophomore album, which was focused around the groups smart, Pavement leaning alt country indie rock.  When I read the press release announcing their new album, “Great Vacation!,” and mentioning a “change in sound,” I couldn’t help but feeling a tinge of apprehension.  Luckily the group has traded good for better, with the weirdo pop on Great Vacation! helping to move their sound forward and creating a highly entertaining record.

Last Kiss on a Sinking Ship from Christopher Heubach on Vimeo.

The closest band I can think to relate Great Vacation! to is the work of Nick Diamonds (Islands, Unicorns).  The song structures are pretty straightforward pop, but the lyrics and presentation are decidedly, and to great effect, weird.  The song subjects range from someone forgetting the safe word and being killed during sex (“Maria’s Ghost”) to hooking up on a sinking ship (“You Can Stay But There Won’t Be Pancakes”).  Other songs are slightly less goofy, but even some of those tracks, like the quasi ballad “Nothing” and the spooky, circus pop of “Axes Ground Looth Tooth” are case studies in abstract pop writing. When the band takes a stab at a classic folky sound on album closer “the Very Next Day I Died,” it to me came across with even less weight compared to the smart material that preceded it. While it is a little bit of a letdown to end the record, it really goes to validate how creative and entertaining as a whole the record is.

While the changing of horses midstream can result in disasters, Sleeping in the Aviary have again successfully completed the jump with their third record.  Great Vacation! is both smart and fun, a feat that isn’t easily accomplished, and results in a really solid effort from a band that has continued to push boundaries and succeed on their third record. Check out the band live Saturday night with Chelsea Boys and Buffalo Moon at the Kitty Cat Klub at the record release show.

Sleeping inthe Aviary- You Don’t Have to Drive