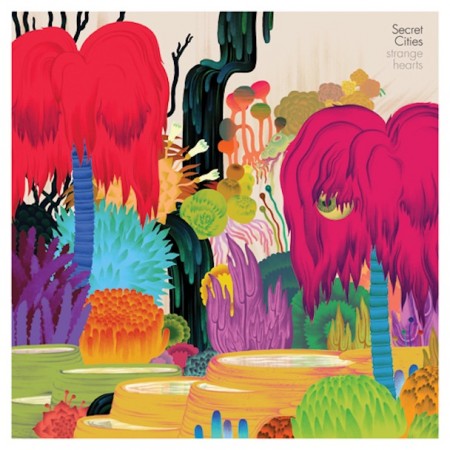 Lebanon, Kansas—crammed along the northern edge of the rectangular state—is the center of the contiguous United States, and a mere 250 miles from the abandoned bank in which Secret Cities recorded their broadly influenced sophomore album, Strange Hearts. The tethered centrality of Kansas is key: In the course of 30 swift minutes, Secret Cities touch on vintage pop sub-varieties from across the country, visiting each with even stride and charm.

Strange Hearts begins its road trip on the West Coast, riffing on surf rock with saccharine harmonies and salty rhythms. Album opener “Always Friends” is a fun-in-the-sun freakout with enough whistling, crooning, and quick-picked guitar for a 60s beach bash. Some tracks—“No Pressure” is a good example—keenly muddle revivalist aesthetics with glo-fi elements, recalling the anachronistic flavors of The Beach Boys’ Pet Sounds.

Throttling across the Great Plains, Secret Cities cater to the Midwest’s penchant for mega-pop. (It’s a survival thing: With 8 ½ months of winter, we need all of the hooks and happy lyrics we can get our hands on.) By the opening bars of “Ice Cream Scene,” you begin to hear how central the tambourine is to Secret Cities’ sound and how the tambo’s wavering, percussive rattle adds pseudo-gravity and epic urgency that complements breezily emotive vocals. The players, two-thirds of whom hail from North Dakota, even pull off a folksy bit of storytelling on “Pebbles”—think Garrison Keillor, heartbroken, at a drag race.

The national tour isn’t over yet. Next we’re in the leafy woods of upstate New York, and, under the spell of Marie Parker’s mellow voice—resounding like a latter-day Jefferson Airplane—Woodstock’s balmy, fuzzy dreamdays materialize like a hallucination. Now we’re in the Northwest, rainsoaked and adorably down on love. Now deep Georgia—a twangy, bedraggled country debonair crackling from a run-down jukebox.

Although Secret Cities use enough tambourine and malt-shoppe nostalgia to make this listener momentarily queasy, they’ve creatively tapped into and reemployed a wide swath of vintage sounds and regional aesthetics.

By Will Wlizlo (Utne Reader)

Strange Hearts is out March 29 on Western Vinyl.