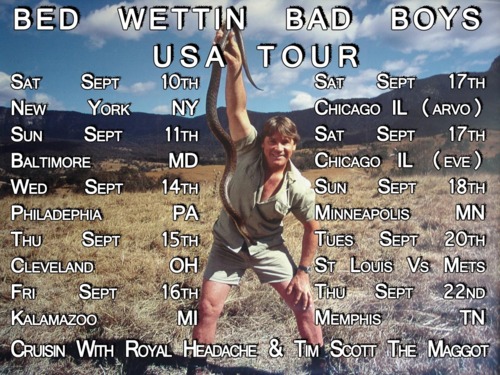 I don’t know a ton about the Australian band Royal Headache outside a few mp3’s and you tube vids, but I know enough to be excited to see the group Sunday night at the Triple Rock. The band, who recently released their debut LP on the awesome Memphis based garage label Goner Records, fall slightly towards the poppier side of vintage garage rock, with the melodies beating out the fuzz as the main focus. The tracks I have heard have that classic garage with a twist vibe that never seems to get old with me. The band is touring with fellow Aussies Bed Wettin’ Bad Boys, who seem to have heard of a certain 80’s Minneapolis rock group and taken a shining to their sound. Let’s just say Sorry Ma, Forgot to Take out the Trash obviously made it to Australia. A track from the band, along with a song from the self titled LP from Royal Headache, are below. Catch both bands with Juvie and Cozy for a cheap $6 Sunday night at the Triple Rock starting at 9PM.