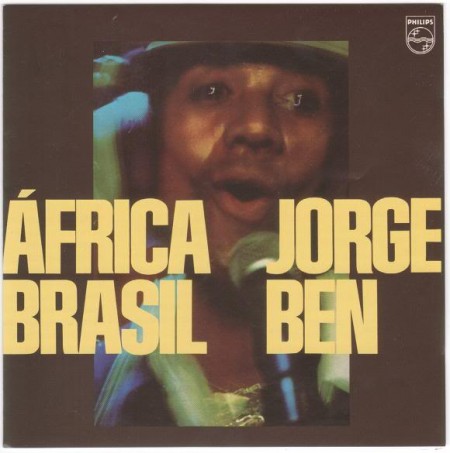 Jorge Ben (now Jorge Ben Jor) may not be the most obscure name in Brazilian music history.  In fact he’s received numerous honors worldwide and continues to do so even today.  Still, with regard to American popular culture, Ben’s moment in the sun flashed in the 60’s/70’s and has long since faded.  His breakout hit “Mas Que Nada” was his only charting single here, and even that was just after it was covered in 1966 by Sergio Mendes (and still today is the only Portuguese language song that has ever charted on Billboard).  Today your average American has probably never heard of Jorge Ben, much less listened to him.  This is a shame because within Ben’s long musical history there is a great deal of excellent tunes which undeniably played a part in shaping popular music worldwide.

While there are a number of different potential starting points for entering into the world of Jorge Ben, for the more experimentally inclined, his mid seventies records is probably the most fertile ground to cover.  Out of these Africa Brasil is as good a place to start as any.  The 1976 record marks one of Ben’s creative peaks, blending diverse elements of jazz, funk, rock as well as African styles.  Though primarily known as a samba/bossa nova artist, with Africa Brasil Ben really explores outside the lines of Brazilian tradition.

The record begins on a very strong note with “Ponta de Lança Africano (Umbabarauma),” an incredibly catchy tune that combines pulsing drums, a funky bassline, as well as a backup choir to produce a throbbing, almost menacing funk sound.  Further on you might recognize the melody from Rod Stewart’s “Do Ya Think I’m Sexy,” in brassy bossa nova piece “Taj Majal” (Ben successfully sued  Stewart for plagiarism resulting in the former donating the song’s profits to UNICEF). Shortly after dreamy Tropicalia ballad “Xica De Silva,” (renamed “Chica De Silva” for Western markets) gave the record its only single outside of Brazil.  Further afield Ben flirts with disco (“Historia De Jorge”) West African guitar (“Cavaleiro do Cavalo Imaculado”) as well as the bizarre (psychedelic funk stew “Zumbi”). Throughout all his stylistic ramblings though, Ben still makes every inch of Africa Brasil sound Brazilian to the core.  This is most often evident through Ben’s emplyment of the unmistakable squeak of the Cuica drum, an instrument which makes few appearances in non-Brazilian music (aside from Nelly Furtado who is best forgotten about).

Jorge Ben, like many of his contemporaries of the time, was also a very actively political commentator in much of his music.  This element of his style is generally lost on non-Portuguese understanding ears.  But fortunately, the music of Africa Brasil is good enough to stand up despite not even knowing what Ben is singing about.  Ben’s tunes may largely be lost in the wash of music that has come before and (especially) since, but if you were looking to re-discover a treasure of the past, you could certainly do a lot worse than Africa Brasil.