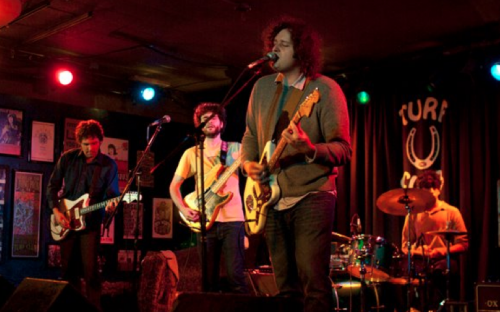 We are pretty used to posting about Neil Weir projects around these parts.  With exceptions such as the occasional solo project or Chambermaids jam (Weir’s other band), it’s usually projects that he has recorded as a producer at his Old Blackberry Way studio.  When it comes to new local band Pony Trash though, Weir is again firmly on the other side of the soundboard.  With the assistance of Chris Bierden on bass (Vampire Hands, Polica) Nate Nelson on guitar (The Chambermaids, Private Dancer, STNNNG), and Ollie Moltaji on drums (Gospel Gossip) Weir leads the quartet.  Thus far, the only Pony Trash tune I have had the chance to listen to is “Submarine,” the first single available through the band’s bandcamp page.   Based on only that it is a little too premature to try and gauge the group’s whole sound – but based on what I am hearing thus far I get a very mid-seventies Pink Floyd vibe – very dark, mellow, guitar driven progressive/psychedelic rock.  “Submarine” will be part of a new 12″ EP that the band will be releasing fairly soonish. keep your ears open – if the rest is this good its bound to be a keeper.