I won’t say for a fact that I’ve “given up” on rock-and-roll, because that would be antithetical to my whole…life thing. No, I’m still a congregate of the First Church of Rock-and-Roll, but the sounds that are changing things these days (for the better) don’t just preach three chords and the truth. Believe me, the Truth is still there; it’s the Word that’s different. The Truth is vibrant and alive in the Twin Cities, and local bands like Gay Witch Abortion, more.is.more, and Falcon Arrow are each giving the Word a run for its money.
Run the gamut of influences all you want (Can, Phillip Glass, Bob Moog)–rock-and-roll is still the lifeblood of these new songs without words. Folks who grew up on a mixed diet of Pink Floyd, Hawkwind, and Lightning Bolt all the while bumping Pharoah Sanders and John Carpenter soundtracks have made a place for themselves alongside the punks and Minneapolis Sound crowd. Go to any show at the Kitty Cat Klub or the 331 Club and you’re sure to find yourself banging your head to, for all intents and purposes, a distorted fugue. The music takes the audience for quite a ride, an aural roller-coaster that whoops your ass and leaves you wanting more. And I think I’ve found my favorite ride in the whole park. Their name is Crash Cuddle, and they are adorable (see above photo as evidence).

Not every guitar-drum band has to sound like either the Melvins or the White Stripes or El Ten Eleven. Minneapolis-based duo Crash Cuddle gives us guitar and drum noise that actually sounds like guitar and drums. Charles Duda does indeed utilize lots of effects and lots of post-rock chord progressions; but the guitar retains all of its character, being used as an instrument and not just as a tool to relay sound effects, even though Duda often plays his ax like a saxophone. The allusion is apropos, I feel, because Duda’ and drummer Garret Benson’s playing often reminds me of jazz. Their grasp of phrasing and storytelling is great. Granted, Duda substitute teaches and Benson mainlines as a father. Diplomacy and cooperation are a gold standard in their respective lives; it only makes sense that their musical chemistry is so succinct. “Rocks On the Gun” has been an earwig of mine upon first listen. But while their debut EP gave us a slash-and-burn introduction to this engaging dynamic, Crash Cuddle have officially signed us up for some AP shit. Strap in, y’all. 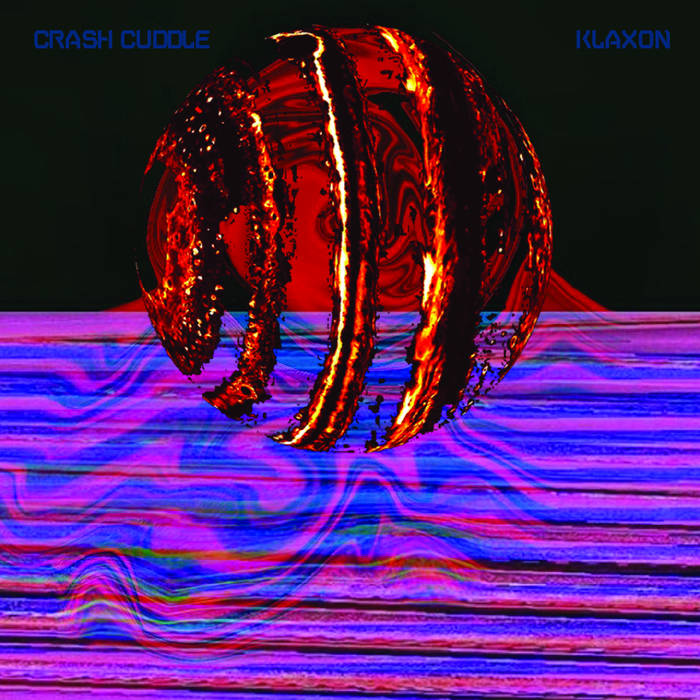 With their debut long-player, KLAXON (2017), Crash Cuddle introduces the world to another dimension of Twin Cities instrumental rock. From the blast-off salvo of “Titillation Battle Station” to the final countdown of “Dinosaur Ghost’s” return to the third dimension, Duda and Benson prove that their light cycle is the hottest rod to beat in the street. Absolutely engaging and evocative, KLAXON reminds me of And So I Watch You From Afar on their bestest of best days. No need for extraneous noodling, just remember why you gave the song that particular name and mine those memories for gusto. “Dead Harmonics” and “A Perfect Time for a Tragic Event” bleed…and now I’ve backed myself into a corner I can’t quite explain. For some reason KLAXON reminds me of Miles Davis, or George Gershwin. Can’t quite decide which. But it’s good…it’s good.

KLAXON is well constructed, too, not just a random assortment of bloops and bleeps but a bona fide song cycle. Tunes seamlessly breathe and grow into one another, allowing cybernetic muscle to glisten around an adamantium skeleton that’s not afraid to bend and swing when necessary. “160 Pound Fists” and “Owning the Bull” are probably my favorite tunes amongst this bismuth mine of post-rock gems. Duda and Benson remain engaging throughout, never tripping over themselves or one another, caught in a cacophonous cavalcade as they unwind their repertoire. If Crash Cuddle were a silent film star, they’d be Buster Keaton, a comfy contortion of caustic causation, like snuggling up warm with an afghan made of broken Christmas lights (in this scenario, you are Mick Foley).

I am constantly in search of things I’ve never heard before. Sure – KLAXON is familiar. But that diplomacy and patience and passion definitely coalesces into something singular. As earnest as this music is there is a consistent, albeit persistent sense of play throughout. Each songs sounds overjoyed to exist, while Duda and Benson sound overjoyed to play them. I, for one, am overjoyed to hear them. Hear “Dinosaur Ghost” below and find that joy for yourself.