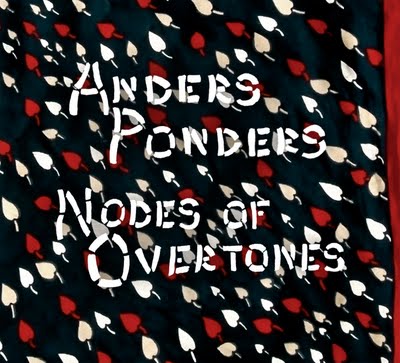 A friend recently asked me if there was ever a point of diminishing returns with all of the music I listen to. I replied with a confident ‘”no,” saying that there is always new and exciting music that kept me engaged and wanting to write about music. The more I thought about it, the more I realized that there was a slight form of this problem that I faced, although it didn’t relate to losing interest in new music. The biggest problem I have found is that I am consistently bombarded with new music (which is great), but I can never keep up with the physical CD’s, digital albums, MP’3 and videos that get sent to me on a regular basis. Case in point is the latest release from Minneapolis based artist Ander Ponders.

I have recently heard songs and read reviews that piqued my interested in the band, and then I saw a picture of the album cover that looked very familiar. After digging through my stacks of promo CD’s, I came across their debut album Nodes of Overtonessitting on my shelf. Lo and behold I had the CD I had been interested in checking out sitting right under my nose for the last few months. Upon finally giving the disc a spin, I found it was well worth the praise that it had been receiving. The band is mostly the project for violist Anders Mattson, who makes pretty, knotty pop music. Songs range from the driving, propulsive “How We’ve Grown” to the Andrew Bird like plucked strings of “Mr. Butterfly” and “Pomegranate.” There is no lack of rich and dense melody on the disc, which weaves like a dream through its short but sweet 30 minutes. Each song has its own rich tapestry and the tracks can serve as both daydream making sound collages and tracks that can be examined with a fine tooth comb on your headphones. Mr. Mattson cuts no corners and, with each successful experiment, proves himself to be a unique talent in the local scene.

Albums like Nodes of Overtones, which came out of left field to be such a strong disc, are reason enough for me to stay diligent for new music. With so many great artists out there, especially locally here in Minneapolis, there is always a surprise waiting out there. Sometimes it is even right under your nose.