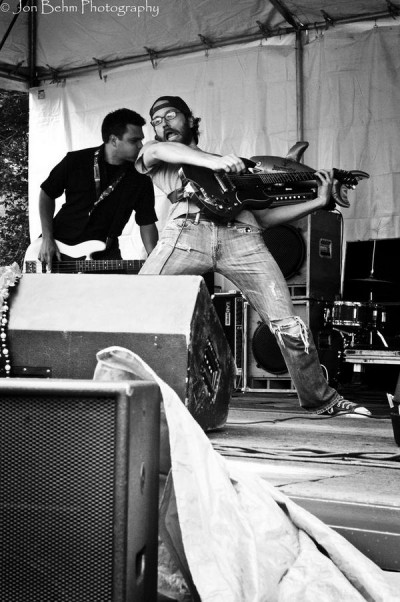 Although you may not think so seeing their chaotic and euphoric live shows, all classic rock covers and shambolic garage rock and roll debauchery, Minneapolis band Private Dancer still know how to put together a strong album. With LP #2, Alive in High Five, Private Dancer again combine their love of 60’s rock with more modern influences ranging from post-rock to post-punk, all wrapped up 10 tracks spanning 25 short minutes.

The groups garage-rock dynamic, propelled by the multi guitar, driving bass and thundering drums, is shown with force on the tracks “Diane,” “Community Garden,””Bajama Beach,” “Weekend” “River Place” and “Into the Dark.” These tracks are the ones you hear live that stand toe to toe with the classic tracks that they sprinkle into their live set. The songs are tied to the classic strain of rock and roll, but have a decided punk streak weaving through the various songs. When the band slows it down one or two notches, on tracks like “All Soul Eaters Day,” there still is a marching feeling to the track. The group seems to have trouble relinquishing their powerful sound, even when they are trying to slow down the tempo. Like on their debut, the group added in a few Explosions in the Sky worthy instrumental tracks to the record. This time they come in the form of album bookends “2000 Year Wave” and “2000 Year Reprise.”

While I would be lying if I said the record fully captures the bands energetic live show, I think that might be asking for something that isn’t realistic. What they did produce with Alive in High Five is a strong testament to their wide spectrum of influences and their skill in breathing life into a genre that many bands simply use to create paint by numbers generic fluff. Even if this album serves no other purpose than piquing your interest enough to see the band live, it will have served its purpose as they could win over even the most hardened of cynics with their blistering live shows. I don’t know if Private Dancer will make it big or not, but I do know that they are one of the most consistently rewarding and fun bands in a exceptionally strong local scene and Alive in High Five only serves to enhance that reputation as far as I am concerned.

Private Dancer- Into the Dark MP3