Will Robots Take Over Music? 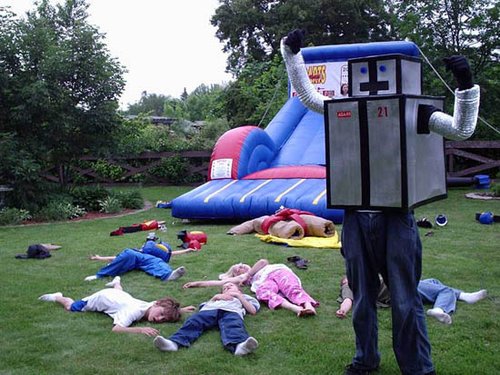 Could computer programs be written that create as creative and nuanced music as humans do today?  Well, according to this cleverly titled piece in Slate they already have, in classical music anyways.  The article profiles composer David Cope, and the complex algorithms he has created that allow computers to create classical music based on Bach’s (as well as other composers) style.  Apparently “most people can’t tell the difference between real Bach and the Bach-like compositions his computer can produce,” and have been “moved to tears” by articicially created orchestrations.  Here is an excerpt on his method:

Cope built a huge database of existing music, beginning with hundreds of Bach chorales that he tediously coded by hand. (Each note is given five values: pitch, duration, volume, when it appears in the piece, and which voice or instrument is making it.) The software then did essentially the same thing any complex computer model does: It scoured huge amounts of data by breaking them up into manageable chunks—in this case, short passages from the chorales—and looked for patterns. It then altered and recombined bits and pieces into new works that fit the patterns it had found.

Does this mean that one day computers may be able to create music in all different genres that are just as listenable as the stuff we currently hear from bands today?  Honestly, I don’t think that it is outside the realm of possibility (I am pretty sure that Lady Gaga is a robot gone haywire).  There isn’t anything about classical music that would make it different or more easily reproduced than any other genre.  Lyrics are a completely different story but there may come a time when singer/songwriters will front all-computer bands. Of course by that time the robots will have made us all their slaves and they won’t have much use for music anyways.