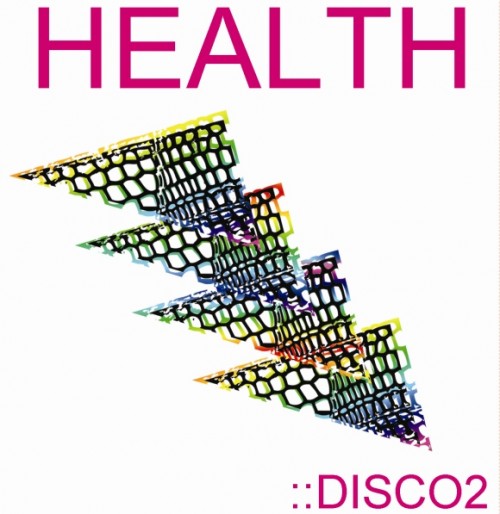 It can be difficult to gain a balanced perspective on an album after reading a single summary of the music. Bias can tilt a review, as can personal taste, history and just about everything else that is unique to the person writing it. So in an effort to offer an expanded perspective in such a medium, here are four reactions, four impressions, Four Takes on DISCO2, the remix album of HEALTH’s songs.

Remixes, like cover songs, should balance the original artist’s intention with the remixer’s fresh perspective.  HEALTH’s ::Disco2—a collection of remixes from their sophomore album Get Color—works successfully together, more or less, but has the tendency to bury the endearing and abrasive energy of HEALTH’s live shows and studio albums.

The high-profile remixes are generally good stand-alone tracks, but the bedrock HEALTH material has been usurped.  Tobacco’s version of “Die Slow” pleasingly features his characteristic throwback hip-hop beats and curious electronics in a way that even diehard Tobacco-haters (ahem) can enjoy, but at the cost of stripping nearly everything but a vocal track from the original.  Likewise, the remix of “Eat Flesh” retains the track’s noise and glitch effects, but is ultimately a vehicle for Crystal Castles saccharine.

Be prepared, as I am about to contradict everything I just wrote: my favorite tracks from ::Disco2 were loaded into a techno spaceship and left HEALTH on the launchpad. Blondes’ and Little Loud’s remixes of “Nice Girls” throb like late-‘90s trance minus the douche-baiting antics of Tiesto and Paul Oakenfold.  And Javelin’s remix of “In Heat” adds bass and synth lines so sexy even D âm-Funk would blush.

::Disco2 is full of fun songs, especially if you haven’t listened to Get Color yet.

I generally don’t like remix albums.  Not sure why.  Maybe they feel redundant or excessive, but mostly I have just found I don’t find them enjoyable.  A past exception was the DFA remix albums, but they may be because I have a man crush on James Murphy. A new album to add to the short but distinguished list is the album Disco2 by Health, which finds them bringing in friends to remix their latest album Get Color.

The album features big name indie artists like Tobacco, Small Black, CFCF, Crystal Castles and SALEM alongside less known, but just as great, electro artists/remixers like Javelin and Pictureplane.  The remixers all do a good job of taking Health’s dark and abrasive music and really breathing some non-scary life into them, many taking cues from the current trend de jour, the ubiquitous “chill wave.” In addition to the great remixes, Health themselves offered up a new track for the album, the more upbeat, dancy “USA Boys.” While it isn’t going to bust into my year end top ten, Disco2 has at least proven to prove an exception to my rule of not liking remix albums and is a very enjoyable record.

Whenever the idea for a “remix”album gets tossed around I’m always a little wary of the end result. In most cases I find them unnecessary, or at least, one-off affairs that fall flat of the originals. But HEALTH’s new album Disco2 doesn’t sink into that trap. The main reason they avoid that pitfall is because of the electronic powerhouses they allowed to toy with their songs. For the most part, the remixes are extensions of their new creators as much as they are a way of highlighting HEALTH’s strong suits – especially Jacob Duzsik’s angelic falsetto. CFCF’s take on “Before Tigers” plays up the band’s essential rhythmic tribal drums, but transforms the noisy original into a breezier, mellow number. Javelin’s way with bouncy synth play comes to the forefront on their version of “In Heat,” turning the track into an atmospheric beach party. If HEALTH was looking for the most honest remixes of their songs they really couldn’t have picked a better set of artists. All of them seem to have no problem completely shifting and melding the tracks into something completely new and genuine. And although I was worried about sludge-happy Tobacco from Black Moth Super Rainbow taking on one of the band’s better tracks in “Die Slow,” he actually glosses it over making it one of the better offerings off of Disco2. Overall, the album is an exercise in synth acrobatics. The remixes from up-and-comers Small Black, Gold Panda and Pictureplane are all fine examples of that. The “Nice Girls” remix from Little Loud is one that takes after the album’s namesake by making the most dance-friendly and disco-esque on the record. Lastly, there’s “USA Boys,” the only new, non-remixed song from HEALTH. Unlike most of the band’s guitar-driven work on their last album Get Color, the slow-moving “USA Boys” takes a more down-tempo, electronic-laden approach. As the album unravels it’s clear that my own opinion of the “remix” album has been shattered. Disco2 is a pleasurable listen that’s full of blissful electronic nuggets.

My world was opened up to the sounds of HEALTH only very recently, so listening to the DISCO2 remix record I don’t really have the benefit of a long history with the original songs (off of last year’s Get Color).  I had high hopes though, just based off of first hearing Tobacco’s take on “Die Slow” which is by far the best material in the mix.  To my ear though the rest is pretty hit and miss, and with most of the “hits” landing none too furiously.  I feel like the CFCF remix of “Before Tigers” as well as Javelin’s take on “In Heat” both sound like they were really trying too hard to be Ariel Pink remixes.  Salem’s “In Violet” is floaty and innocuous enough to go almost entirely unnoticed (as a matter of fact, I could say this about most of the back half of the record).   Crystal Castles get in a pretty interesting jam with a weirdly gothic “Eat Flesh” though, and the Small Black remix of “Severin” has some legs too.  The one original HEALTH track “USA Boys” is good too, but I feel like it should be retrofitted into the soundtrack of the first Karate Kid movie for a training montage.

As far as the remixes go, I feel like all the artists on the bill here could have gotten a little more creative.  With a few rare exceptions, it sounds like most of the remix artists here used the exact same formula when re-tooling their tracks – stripping out the jagged edges of HEALTH’s original orchestrations and turning them into forgettable, synthy pseudo-techno dance grooves.