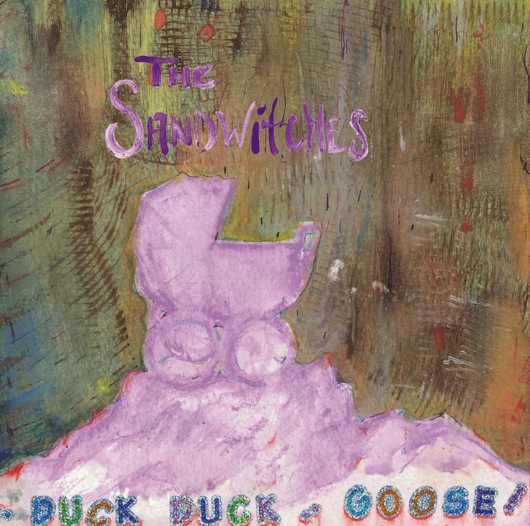 There are some albums that I really like that for whatever reason I don’t get around to reviewing. Some get lost in the shuffle, some I just can’t find the words; while others I find them so late in the game that it would be redundant to give my two cents. One album that I still go back to quite a bit that I wish I had reviewed when I first got it is the last full length from The Sandwitches, the excellent How to Make an Ambient Sadcake.

Their debut LP was a record that I could not believe did not resonate with a larger audience, with its homespun, wispy folk and down home rock and roll (I mean, c’mon, She and Him sell out shows across the country and it was a much better record than either albums from that group). The music was easy to like and chalk full of strong melodies, but didn’t seem to take the easy way out like so much pop music does. While I missed out on reviewing their debut LP, I am not going to make the same mistake with their latest EP, Duck Duck Goose. While it is still good, the record is quite a bit different than their first. The songs seem a little darker, with the buoyant spirit from their LP replaced with a more paranoid and hypnotic structure that make this a perfect late night album. The EP is only six songs long (with the two title tracks actually being more background noise than songs), but it is a strong collection of tracks. The songs, especially “Baby Mine” and “Rock of Gibraltar,” sound like bruised hymns sung in the most beautiful, world weary voice. Where the last record was more upbeat and accessible, Duck Duck Goose is a record that will be a perfect complement to right situation (presumably something very low key).

The Sandwitches – “Baby Mine” from Empty Cellar on Vimeo.

I don’t know if Duck Duck Goose will be the album that gets this group attention, but hopefully it will. Although it definitely is a different experience than the debut album that made me like them so much, it is a record that shows to me that The Sandwitches are more than a flash in the pan. One can only hope this record will bring them to a bigger audience, who in turn will also discover their excellent debut LP and get this band the recognition they deserve.

Idaho State Journal February 28, 2011 | Scardino, Tammy POCATELLO –Peggy Cook usually only makes her special homemade dog biscuits during the Christmas holiday season, but when she heard about the need for a fundraiser she knew she had the perfect set of ingredients to enter into the mix.

The Masonic Eastern Star member grabbed the recipe she has held onto for the last decade and added her support to the Worthy Grand Matron and Patron’s service project. Christy Schill-Newbold and Larry Allen wanted to raise enough money to purchase a service dog for someone in need.

“We got busy and decided to take donations instead of put a price on them,” Cook explained. “Everywhere we had a booth, they sold out. The dogs like the bones and even some cats do too.” Ironically, Cook does not have any dogs, but she loves stirring up a batch every year to pass out as gifts to her dog loving friends. here homemade dog treats

“I don’t know if (the dogs) behave any better, but it’s certainly a treat they look forward to,” Cook said as she modestly denied the praise she secretly gets from her friends. “I’m sure the bones could be used as a training tool.” The experimental homemaker could not resist the cooking challenge when she spotted the recipe in the Lady’s Home Journal magazine years ago. Today, she is happy to share her secret surprise with the hope she will be able to raise funding for three different organizations : Guide Dogs for the Blind, Dogs for the Deaf and Canine Companions for Independence. web site homemade dog treats

Liver, cottage cheese, wheat flour and eggs are just a few of the ingredients that Cook throws into the oven and bakes until firm.

How are the dog bones shaped?

In the past, Cook has used a cookie cutter that is in the shape of a standard, traditional dog bone. When she cannot seem to find that particular metal device, she uses other shapes that are crafted with the holiday spirit in mind.

The idea has crossed her mind to make the treats for profit, but the woman, who is originally from Iowa, has declined for the simple fact that her independence is also important. Retired from Farm Bureau Financial , Cook enjoys traveling and staying with her now grownup children for months on end.

Besides, she said the dog bones are natural and preservative free because they do not have to maintain a shelf-life guarantee.

If they must be preserved, Cook suggests freezing them.

“I’ve tried a lot of recipes, some of them were good and others were bad, but I usually have success with things,” Cook said. “I think cooking gives you a lot of confidence and I think a little of that is good for everyone.” “I don’t know If (the dogs) behave any better, but It’s certaInly a treat they look forward to. I’m sure the bones could be used as a traInIng tool.” — Peggy cook JOE KLINE/IDAHO STATE JOURNAL Peggy Cook holds a cookie cutter she uses to make homemade dog biscuits she gives as gifts or makes for special occasions.