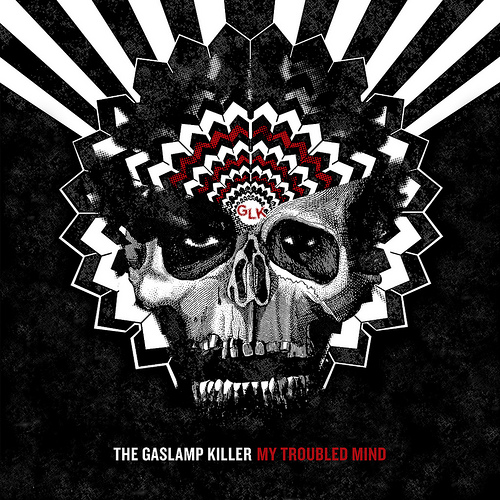 We would do well to keep an eye on Los Angeles DJ/Producer The Gaslamp Killer (formerly known by the stage name THE MOTHERFUCKING GASLAMP KILLER) – he’s the next heir apparent in the Flying Lotus circle of influence – “the next Gonjasufi” if you will.  Gaslamp (born William Benjamin Bensussen) produces a menacing brand of electro space-funk that touches on tightly wound dubstep, world music, and retro psychedelia without really ever staying still in one place long enough to get tied down.

Born out of the hotbed of artistic talent that has sprung up from L.A.’s Low End Theory musical research/development/experimentation sessions, Gaslamp releases his new EP to the masses this Wednesday.  The EP, titled My Troubled Mind EP, contains two main sections, each with its own short introduction.  “Intro A” starts the EP out with a truly terrifying space odyssey called “Anything Goes” that sounds like a jacked James Brown drum part hitched to a Sci-Fi horror movie soundtrack.  The weirdness continues with the Anatolian funk of “Turk Mex,” which shares a common ancestor with Oh No’s Dr. No’s Oxperiment (as well as a few choice Gonjasufi cuts that tread in the same territory).

The B section of the EP (prefaced with “Intro B”) continues the exploration with afrobeat rhythms over droning synth waves in “Baiafro,” bizarre, ominous synth progressions in “Ruskie Electric” and to ice the cake, mashed sixties lounge and psychedelic slow-jams mixed with fuzzed out guitar and a spoken word part in “Birthday Music.”

With such a wide ranging mix here there is bound to be some turn-ons and turn-offs amongst the numerous backflips and left hand detours that The Gaslamp Killer squeezes into the space of less than twenty minutes.  Even if you don’t always like where he goes though, it’s hard not to follow the DJ as he navigates through strange, newly discovered soundscapes.  The Troubled Mind EP may not be his crowning achievement, but it definitely is the work of an artist who is looking to try something new.

The Troubled Mind EP will be available Aug. 4th on Brainfeeder.