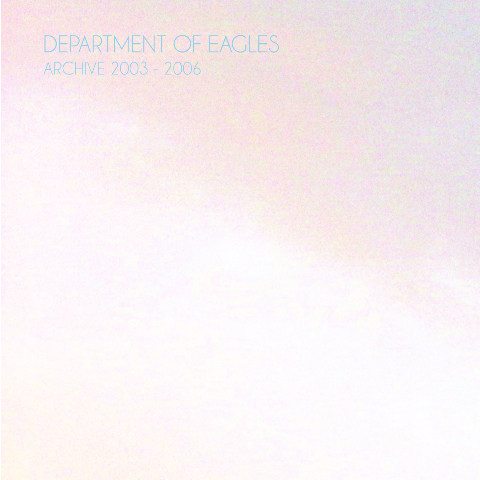 The most curious thing about Department of Eagles’ new album, Archives 2003-2006, is why it wasn’t deemed worthy of a “proper” release as a full-length.  The six songs (not to mention five practice sketches), recorded between their debut The Cold Nose (2003) and last year’s magnificent In Ear Park are on par with anything the band has done, and for that matter, on par with anything (Daniel Rossen’s main gig) Grizzly Bear has done.  In fact, with every new Department of Eagles release, it becomes increasingly clear who the driving genius behind Grizzly Bear is.

Rossen is a songwriter of singular abilities, and those abilities are on full display here.  He seems able to create lush melodies at will.  Yet, he holds back from polishing them and converting them into verse-chorus-verse pop songs, as so many would.  Instead, he allows a rich melodic line to emerge, seemingly out of nowhere, and just as quickly allows it to dissipate, as on standout track “Deadly Disclosure,” where he sings “bow out of this race, before it’s too late. . .”  The aery elegance leaves the listener waiting – expecting, even craving the return of the line.  But instead it turns to a separate melody, where he sings “now the time has arrived . . . thank God . . . help me.”  It’s repeated once, and the song ends.  This bestows a fragile, gossamer feel to the music and allows it to catch you off guard, even after repeated listens.

The “practice sketches” interlarded between the titled tracks are interesting in their own right.  If you listen closely, you’ll hear an idea – a bar or a harmony that appears in other DOE and Grizzly Bear work.   In that respect, they offer a tantalizing glimpse into the creative process, but they also provide effective refrains for the more finished songs.

It remains to be seen whether Department of Eagles will ever attain the same status as the much better known Grizzly Bear.  Both Rossen and Chris Taylor (who produces the DOE albums and occasionally lends them a helping hand on the bass) seem to treat Grizzly Bear as the more important project, devoting far more of their time to recording and touring with that group, but something uniquely beautiful happens when they team up with Fred Nicolaus.  Famous or not, here’s hoping that they keep making music together.