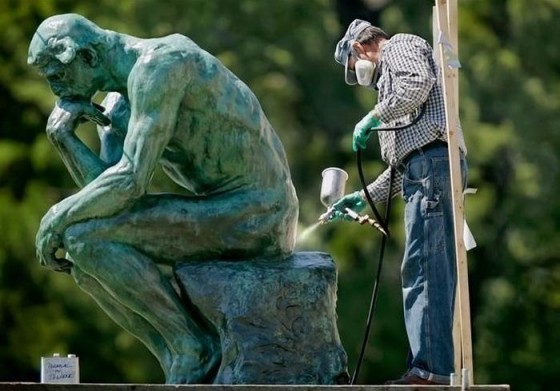 I was reading an interesting interview piece on Slate’s The Wrong Stuff blog yesterday about how couples’ philosophical perspectives on truth constantly get them into relationship trouble and something struck me:  much of the article’s discussion of the “truth” and how we view it is also directly applicable to music criticism and they way we perceive it.  In the interview Dr. Harville Hendrix (ok, yes, he is Oprah’s “relationship whisperer” but please don’t judge) speaks a great deal about our general inability to view issues completely objectively:

For all of us, we are at the center of our own universe, and everything else is the periphery. So it makes sense that we think that the way we see things is the way they really are. That’s natural.

While no one could rightly claim that music criticism is supposed to be objective, this does say a lot about how radically two or more different people can perceive the same music.  For instance I think the new National album is kind of boring.  You, on the other hand, may have had a completely different experience with the new National album – and might proceed to call me out with a nasty blog comment, something along the lines of: “you’re stupid, you don’t know anything about music, shut up and die.”  Here’s an example of my perceptions of a certain musical piece are radically different from yours, and since we are both the centers of our own sense of truthfulness and righteousness, we cannot see each other’s viewpoint.

Harville goes on to discuss the Correspondence Theory of Truth and how the idea that how we perceive things directly relates to how those things actually are, intrinsically:

There’s a philosophical theory called the correspondence theory of truth, which pretty much describes most people’s ordinary, everyday, nonreflective way of thinking about themselves and the world. Simply put, it means the belief that there is an exact correspondence between what I see and what’s really out there: “My perspective is universal and what I see is what is real.” That’s a very real part of the human experience.

And lest we ignore the general nasty nature of (it seems) the majority of music criticism feedback, Harville addresses the hostility in which some of us react to different opinions as well as how this can be exacerbated by a problematic early childhood development:

Some people are wounded in childhood by an intrusive or neglectful parent, and that produces emotional pain, and emotional pain produces self-absorption. And when you are wounded and become self-absorbed, your natural inclination to see yourself as the center of the world and everything else as on the periphery is amplified to the point where you cannot be flexible with data. You can’t actually take in new information very well. When you’re wounded early, you organize the world in a certain way, in order to give yourself some sense of inner cohesion. You make up your mind about the way things are, who you are, who your parents are, and although that helps you survive, it also means you have all these very rigid ideas surrounding what is fundamentally a fragile inner core.

To entertain the possibility that you’re wrong is to feel anxiety about your inner organization, as well as shame, embarrassment, and even guilt about the erroneous perspective. And shame and guilt are almost intolerable emotions. So in order not to experience that anxiety and shame and guilt, you become rigid in your perceptions.

Harville is, of course, talking about human relationships here, but I think that the deeper meaning can be applicable across any sort of human interaction, including music discussion.  This would lend a lot of weight towards the surplus of “fuck you” reactions music criticism receives in the world (so nasty blog commenters,  I guess we can blame your “fragile inner core” for your hostility).

I guess the real question is “Is there such thing as wrong and right in music criticism?”  The easy answer in “no” and that everything is subjective, but there is another theory that seems to be the most generally prescribed for those who believe some music is better than others.  It is called the Coherence Theory of Truth and is diametrically opposed to the aforementioned Correspondence Theory.  In layman’s terms (as it relates to music), Coherence Theory states that if there is coherence between a number of “music experts” on a certain piece of music than that opinion holds weight.  So if Pitchfork, Spin, the AV Club, etc. like it then it must be in fact, good.  This is slightly different than the Consensus Theory of Truth, which would hold that if an album is universally popular than it must mean that it is good (you could call it the Britney Spears Theory of Truth).

So which theory is right? Which is true?  Doubtlessly we could all disagree to no end on the answer to that question, perhaps proving multiple theories in the process.  My personal opinion, and the way I approach music criticism, really doesn’t correspond to any one of these theories entirely.  I don’t believe that music that is universally popular is automatically “good” (though let’s not drag ourselves down the rabbit hole of what “good” means just yet) and I don’t believe that general coherence amongst music critics also defines a music’s quality (though I might be persuaded otherwise).  When I write about music though I am presenting my own opinion, my single perception of what that music means to me.  I am not trying to convince anyone that my opinion should be held universally (though I admit that that would be nice).  I am basically saying here are my thoughts on this music – and you can agree or disagree but it doesn’t necessarily make either one of us “right.”  Perhaps this is the easy way out, the way to avoid the responsibility of actually owning and defending an opinion, but the more I think about it the more it seems that it can’t possibly be any other way.

What are your thoughts?  This screed is more of a stream of consciousness than a well-developed editorial, so if you have any thoughts of your own about music criticism I hope that you share them here.