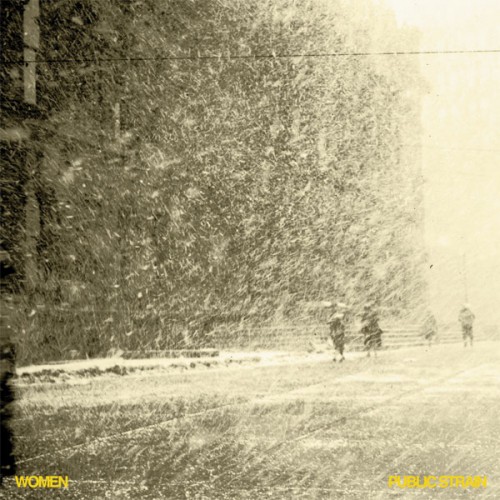 Canadian pop deconstructionists Women are back this fall with a follow up to their 2008 self titled debut.  Public Strain is their second offering, and offers more of the mathematically inclined music that still leaves us scrambling for accurate signifiers.  Math Psych?  Experimental post punk?  None of the labels sit too easily on the band – and if anything, Public Strain goes even further to defy those generalizations.  With producer Chad Van Gaalen once again at the helm, Women have prepared another buffet of pop obfuscation and chameleonic styles.

Like an ADD addled child, Strain never really sits in one place for long.  Complex bass and guitar anti-melodies give way to low-fi psychedelic sludge, industrial garage rubs up against delicate Beach Boys-esque strummers, and most importantly, it all seems to work, somehow giving the record a cohesion that logic would otherwise defy.  The quartet is occasionally guilty of getting a little flashy (in a “look at how fucking smart we are” way) in the complex instrumentals of tracks like “China Steps” and “Heat Distraction,” though the only time they really take it too far is in the instrumental tune “Bells” which grinds the middle of the record to a halt.  Though “Bells” is only three minutes long, it seems to go on for much longer, sounding like a cross between a woodwind warm-up exercise and a horror movie soundtrack.   Generally though the intelligent takes on pop really work to the band’s advantage (“Heat Distraction” particularly may make my year end list of top singles).

On the flip side of Women’s math rock penny is the strong current of low-fi psychedelia that runs through most of Public Strain like a pandemic.  Standout tracks “Narrow With the Hall” and “Eyesore” buzz with classic pychedelic rock distortion while laid back jams “Penal Colony” and “Venice Lockjaw” flirt brazenly with freak folk.

Fans of sheer stylistic dexterity will wont for little in the band’s constant desire to color outside the lines.   Whether that boundary blurring makes for an “enjoyable” experience will depend on your tolerance for idiosyncratic, modular pop arrangements that are short on hooks and long on smarts.   Or in other words, if you liked Women’s self titled debut, here is more of the same only better.