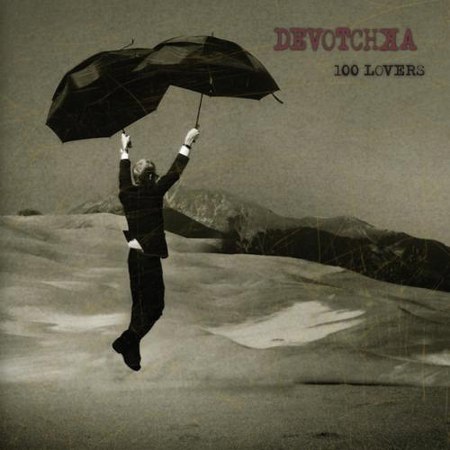 There was a time when I eagerly awaited the next DeVotchKa album with the fervent passion of a true die hard.  After 2003’s Una Volta and the following year’s How It Ends, the multifaceted four piece had set the bar pretty high – so high in fact that even relatively strong follow up’s in the Curse Your Little Heart EP and A Mad And Faithful Telling seemed pretty middling in comparison.  Now that the band has recorded their fifth effort, 100 Lovers, I am happy to say that they seem to have once again found some of their former greatness.  While Lovers might not be a perfect album, it does recapture the sort of epic romanticism that the band cut its teeth on – reminiscent particularly of How It Ends but also with a more fully fleshed out sound that reflects the band’s growing indie-rock sensibilities.

And unlike in previous efforts, those sensibilities don’t get in the way of the band’s crafting of great songs.  While DeVotchKa began as a world music influenced band, particularly taking inspiration from Eastern European Roma music and Mexican polka styles; as of late the band has seemed to model itself more on the Arcade Fire model of epic, soaring indie pop.  Whereas on A Mad and Faithful Telling this had the effect of breaking up the band’s content into two separate camps – 100 Lovers seems to have found a better balance.  Even the most pop oriented work on Lovers is redeemed by its allowance for the band’s baroque roots to shine out as well. “100 Other Lovers” for instance, is jazzed up by Tom Hagerman’s always interesting, classically trained violin work.  “The Common Good” benefits similarly, in addition to a gypsy handclap beat.  And the best work on Lovers fully embraces a wide spectrum of influence – Mariachi horns in stomper “Bad Luck Heels,” French accordion and rockabilly in “The Man from San Sebastian,” and so on.

One thing that hasn’t changed at all for DeVotchKa is frontman and multi-instrumentalist Nick Urata’s haunting baritone.  Throughout Lovers and particularly in standout tracks “All the Band in the Sea” and “Exhaustible” Urata carries the sound nearly completely, affecting his trademark mix of restlessness and weariness.  It’s the voice of a man who can neither sit still nor rest.  And while DeVotchKa contains some top notch musicians, it has always been Urata’s epic wail that’s been the secret to the group’s success.  Urata shines here like he’s recently rediscovered his sense of sorrow, and the sound’s funereal sense of loss and rebirth is back in all of its soul-tugging force.   I haven’t heard a DeVotchKa album I have liked this much since 2004, and I can only hope that it’s the mark of a band that is more confident in the direction its heading.

After 25 years, salon is still evolving

New Haven Register (New Haven, CT) April 21, 2007 | Cara Baruzzi When Christopher Rollins began styling hair at age 16, he didn’t envision it as a long-term career, and never expected he would be celebrating the 25th anniversary of his own salon this month. see here hairstyles for women

“I just did it to aggravate my parents,” said Rollins, 57, owner of Christopher’s Salon & Day Spa at 1575 Boston Post Road.

The native of England originally intended to go to college and become a history teacher, a profession his parents favored, but changed his plans to annoy them, he said.

But finding himself swept up in the hair and fashion craze of the late 1960s, when trends were thrust into the spotlight by pop icons such as The Beatles, Rollins went on to train with L’Oreal and attend the Royal London College of Fashion and the Vidal Sassoon Academy, all in London.

He came to the United States in 1977 to work in a salon business venture that “fell through,” and after working in several other salons, opened Christopher’s in 1982.

The salon originally opened April 1, 1982, in the Westville section of New Haven. Exactly four years later, again on April 1, he opened a second location in Village Walk in Guilford, which moved to another location on the Boston Post Road 12 years ago. The Westville salon burned down after being struck by lightning 17 years ago.

In Guilford, the 4,000-square-foot Christopher’s Salon & Day Spa has 24 employees. It specializes in hairstyles for women, men and children, and offers spa services including facials, makeup application, and nail and body treatments.

Four years ago, Rollins opened the European Academy of Cosmetology and Hairdressing with co-owner Michael Criscuolo. Located next door to the salon, the academy occupies 4,000 square feet and has four employees.

The key to the salon’s longevity has been its ability to evolve with changing trends, said Rollins, who lives in Guilford and owns the salon with his wife, Mariann.

“The trend now is for salons to revert back to salons,” he said, adding that Christopher’s salon will still offer nail and makeup services. As for other day spa options, though, “We’re easing (them) out slowly but surely.” While one aspect of the business is shrinking, another is poised for expansion. Rollins and Criscuolo plan to open additional academies throughout the state in the next several years, Rollins said. here hairstyles for women

At the existing academy, would-be stylists are taught various techniques and prepared for state-mandated certification exams. Graduates have gone on to work in top salons throughout the country, he said.

Rollins said his evolving business strategy is the reason his salon has endured for 25 years, and the best way to ensure its future.