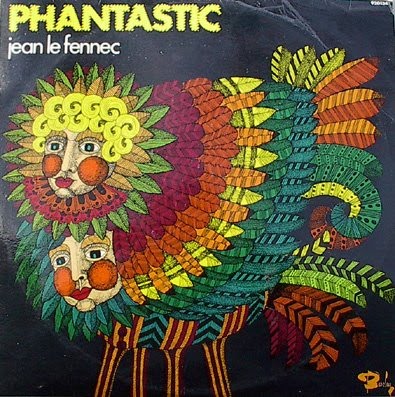 While the veracity of the word “obscure” when it comes to music nowadays may be dubious (at least according to this recent piece on the “rarity” of music in the digital age) there is still a bit of mystery behind Frenchman Jean Le Fennec’s 1969 psych-rock album Le Phantastic.   While the LP is readily available in electronic format throughout the file sharing systems, an original vinyl copy of the record is nearly impossible to find.  Information about the artist himself is similarly difficult to come by.  So, despite being easy to obtain – in some ways Le Phantastic has retained its obscurity.

The album itself is nine tracks of Le Fennec’s playful, undoubtedly French, psych-pop.  Sounding like he had an orchestra’s worth of musicians backing him, Le Fennec fills out the LP with spacey instrumentation as well as vocal effects.  The singer distorts and echoes his own voice in “L’Abandon,” adds the occasional angelic choir (“L’Enterrement”) and even includes a group of children chanting, bizarrely, at the end of “la Boule Et Le Verre.”   And buoying the odd vocal choices are a wide array of instruments from brass, woodwinds, and the occasional xylophone to far out synthesizer effects.   And over it all Le Fennec generally presents his cool, unaffected French lyrics like a bizarre Serge Gainsbourg.  It’s really pretty strange – even for a time when psychedelic experimentation was widespread.  At times Le Phantastic sounds like it wants to be a Disney film score – at others the soundtrack to a debauched swinger’s party.

And over fifty years after its initial release Le Phantastic still stand up pretty well as an engaging listen.  It may not be the weirdest psych-pop LP to come out of the sixties, but it certainly doesn’t sound much like anything else from then or since.  You can easily find the album on the net to decide for yourself – and even if that makes it no longer obscure, you can still get a kick out of hearing something that used to be nearly impossible to hear.