Do Look Back | Pete Rock & CL Smooth: The Main Ingredient 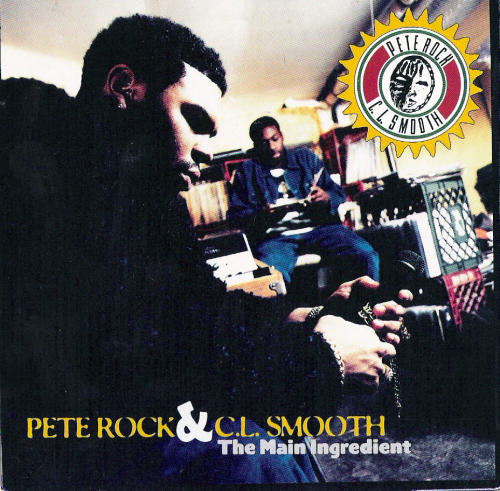 While walking around Minneapolis a few weeks ago I saw a young dude sporting a full on Kid N’ Play hi-top fade that would have rivaled Kid’s afro in height.  It got me thinking.  With all this premature early nineties fashion nostalgia, could it possibly mean that soon we might see a return to the jazz-sampling, lyrically focused hip hop of the same time period?  If so count me in – call me resistant to change but I still don’t think we ever had it better than the early days of Rakim, KRS, Tribe, De La Soul, and the Biz Markie, just to name a few of the stars of that particularly fertile growth period.

That hairdo also got me thinking about one of the last great records of Hip Hop’s Golden Age, Pete Rock and CL Smooth’s The Main Ingredient.  An outlier in late 1994, Main Ingredient hit the airwaves around the same time that Nas, Wu Tang, and Biggie Smalls were changing the face of East Coast hip hop as we know it.  Up next to the gritty, streetwise nihilism of Illmatic, Enter the Wu Tang, and Ready To Die, the positive, afrocentric rhythms of Main Ingredient seemed positively dated on delivery (even though Rock actually contributed production to both Nas and Biggie’s records).   And that’s a shame because it is one of the better recordings of the time period, even rivaling Pete Rock and CL Smooth’s much better known Mecca and the Soul Brother in terms of quality (though suffering for not containing a single anywhere close to the duo’s opus “T.R.O.Y.”).

In sixteen mostly excellent tracks, Rock and CL perfect their legacy even as its already fading from the limelight.  “I Get Physical,” “Get On The Mic,” “I Got a Love” and titular “The Main Ingredient” are all top notch examples of how CL Smooth’s criminally underrated lyrical ability fit in so perfectly with one of the greatest producers of all time’s esoteric jazz sampled beats.  Neither artist has sounded better since (with the exception of a handful of Rock productions on other people’s records).   As a testament to Rock’s production, his Harvey Scales sample in “Sun Won’t Come Out” is enough to carry the record’s weakest lyrical material (Smooth spends most of the track rapping about how great Mecca and the Soul Brother was) making it a surprisingly good tune.  And if you ever want to feel like you’re partying down with the A Different World crew at Hillman College just put on “All The Places,” or “Tell Me,” and try not to spill your Bartles & Jaymes on your fannypack while you groove to the thoroughly retro, positive vibes.

As dated as the sound on The Main Ingredient can seem, Rock and CL’s collaborations still sound remarkably fresh, particularly in an age when all things early nineties have once again come back full swing.  The record is a timeless testament to two artists who had an incredible chemistry together, in some ways even more so than the time period’s most famous rap duo, Eric B and Rakim (of which to some extent Eric B was dead weight).  It’s a shame that that chemistry ended shortly after Main Ingredient came out (the duo parted ways in 1995) but it may have also have been for the better.  Early nineties hip-hop is thusly called because the genre never really made it past 1994.  While Pete Rock and CL Smooth paved the way for many of the other great artists that shaped hip hop after them, their heyday effectively ended when their paths split.  While CL Smooth released some poorly received solo material and Rock became a behind-the-scenes legend, neither artist ever again found the magic that they had as a duo.