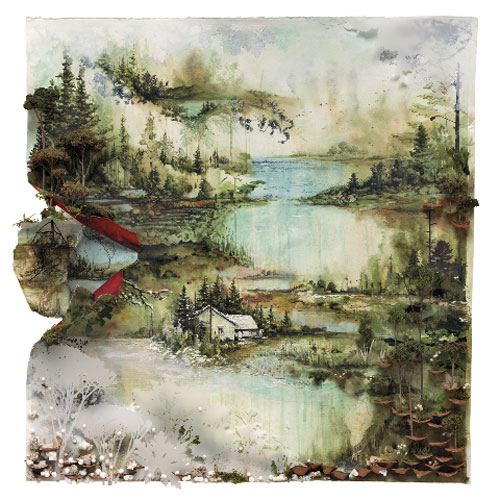 It can be difficult to gain a balanced perspective on an album after reading a single summary of the music. Bias can tilt a review, as can personal taste, history and just about everything else that is unique to the person writing it. So in an effort to offer an expanded perspective in such a medium, here are Five reactions, Five impressions, Five Takes on Bon Iver by Bon Iver.

While it has been awhile since we heard some new solo Bon Iver material, we haven’t necessarily been scarce with what we’ve heard either.  However, it was not a very clear sign of what was to come until his self-titled follow up struck.  Needless to say its not a drastic turn from the work we’ve heard from the Blood Bank EP or For Emma, Forever Ago, but the sound has grown more stark and dreary, as if it were recorded in a grain siloh (see: My Morning Jacket’s It Still Moves), but at the same time, it gives room to the vocals and arrangements more breathing room, which in turn allows Bon Iver to flourish into a magnificently well done record.  As was the case with For Emma, Forever Ago, it is a curt record, but its definitely something that grows with each track, such as the sparse but random drumrolls in “Minnesota, WI,” or the wonderfully strummed guitars on “Holocene.”  Vernon’s vocals still are a great focal point, something a listener can lose themselves in.  Overall, its definitely a welcome follow-up that’ll keep you excited for what Vernon and company have in store next.

I have mixed feelings about the new Bon Iver record, honestly.  It’s a very slickly produced, tasteful sounding record – so much that at times I think it borders on soft rock muzak.  Justin Vernon has found a way to combine the muse of his raw folksy singer/songwriter solo debut with a more jazz oriented, complex-yet-understated sound.  And while I like the idea of sax, drums, banjo, electric & steel guitar, etc – I find that in this case they are employed so smoothly that they borderline on innocuous.  “Perth” and “Holocene,” are probably the most egregious offenders here as far as blandness goes (though for my money the Gayngs-influenced smooth jazz number “Beth/Rest” is the record’s worst by far).

At the same time I love Vernon’s voice and find that his magnetically emotive songwriting (which can be completely captivating in a live setting) still resonates quite well in the studio.  Vernon’s lyrics are a bit hard to understand, but they do shine in tracks like “Towers,” “Wash,” and “Calgary.” And on “Michigant” Vernon’s singing is as melancholy and heart-rending as anything on his debut.  It’s made more effective by the fact that the singer only employ’s vocal effects minimally and tastefully – warping his voice delicately without losing its warmth or richness.

Bon Iver, Bon Iver may have some weaknesses, but I imagine that its strengths (namely Vernon’s talent for soul-tugging melodies) will be enough to make it a huge success.  Unfortunately though the more success the young artist sees, the more difficult it becomes to hear him live. And I will stand by my belief that that is, and will always be the best way to hear his music.

Bon Iver’s second full length album is extremely well crafted, well thought out, and totally different than their debut, For Emma…Forever Ago. Clearly influenced by leader Justin Vernon’s other side projects, such as Volcano Choir and Gayngs, the self titled album successfully touches on, and surpasses the old sound of Bon Iver while creating an innovative new sound.

Vernon’s challenge was to create an album with Bon Iver that was able to stand up to, and surpass the heartbreakingly sad, sappy success of For Emma…, which continues to be one of the most sweetest and saddest break up albums of all time. You cried to it, you wrote long-winded journal entries to your ex-significant other to it, and you cherish it, like all of us. But it’s like that child actor that can never escape being put into a six-year-old box, just because they made ten movies about being home alone. We don’t want that for Vernon and the rest of the Bon Iver crew– and I think that waiting so long to create another Bon Iver album was a smart move. Vernon has shown us what else he can do, and this newest album combines the soft-rock influence of Gayngs–which can be heard in tracks like “Beth/Rest,”–with the minimalist and more abstract leanings of Volcano choir–which can be heard in “Wash.” Vernon seems to slyly rep Minneapolis hip hop in upbeat “Minnesota, WI” as lyrics flow like a rap song

The album is strong as a whole, but each song has it’s own unique style that allows listeners to pick out certain favorites. Mine include “Wash,” a beautiful song starting out with minimal piano and Justin singing. It then builds into a rhythmic pulsating crescendo that is reminiscent of For Emma’s… simplicity, but with intricate tempo changes, and a maturity that wasn’t there before. Vernon brings back the folky guitar riffs on “Holocene,” but ads a driving beat and a beautiful crescendo– easily making it my favorite on the album.

I don’t love every song– I never dug the soft-rock vibe– but for some reason i like and appreciate seeing the band experiment, try new things, and perfect them, even if they start out with silly synthy pulsating. These are all extremely talented songwriters and musicians and the places they’re going is exciting.

With the full length follow-up to Bon Iver’s critcially hailed debut 2008 Emma, Forever Ago, titled Bon Iver. The band will shine a much brighter light on the arty college town of Eau Claire, Wisconsin. Vernon and company followed up their debut with 2010’s Blood Bank ep, where the band started to experiment with electronics; this hinted at the direction of the new record, which is indie-folk at its core with a more adventurous musical backdrop. Bon Iver’s main songwriter/front man Justin Vernon has spent the past year or so working with Kanye West, Gayngs, Volcano Chior, Megafaun, All Tiny Creatures and various other lo-fi folk projects. Vernon’s piercing falsetto lies somewhere between the haunting Elliot Smith and contemplative side of Feist; it is a voice that rings with sincerity.

Bon Iver opens with “Perth”, a sparse lullaby where drummer S. Carey reigns before it blossoms into a mini-heartbreak ballad. Things pick up on “Minnesota,WI”, anchored by the gorgeous refrain “never gonna break, never gonna break” over jazzy horns, sleek guitars awash in some lo-fi noddling. There’s “Holocene” with angular harmonics, and gentle strumming leading into the gentleness of “Towers”. “Michicant” is a self reflective, soulful jump. The emotional centerpiece “Hinnom,TX”, finds the band in full flourish. The standout track is the electronic organ fueled, atmospheric lo-fi/high production banger “Calgary”. “Beth/Rest” closes the record in a strangeness with a 1980’s VH1 power ballad – definitely a weird way to close such a modern record. That notwithstanding moves Vernon and crew into a new way of celebration, the romance of small town Americana in current times with a nod to old school fashion over the metropolitan lifestyle.

Bon Iver wins, particularly with “Minnesota, WI”, “Towers”, “Hinnom, TX”, and “Calgary” not as immediate as its predecessor Emma, Forever Ago, but its growth is very evident. Bon Iver works because Vernon embrace of “the wall of sound” sonic exploration, whereas Emma, Forever Ago was a stripped down affair, Bon Iver has subtly blown the fuck up sonically. Bon Iver is more anthemic as Vernon’s sensibility, that of a small town guy with a unique way of expressing grand ideas is in full command. 2011 has already produced a few of these new records, an era of sad/pretty, much that’s sad but not depressing. Bon Iver is among this era’s “soft revolution”, whether it’s James Blake, Destroyer or Thurston Moore where quiet beauty reins. Maybe its Obama era music, stripped down, but, still layered in eloquence.

It seems like forever ago now that an album of spare, haunting, lovelorn songs crooned in broken falsetto came out of nowhere (Eau Claire, to be specific) and catapulted Justin Vernon to the top tier of indie singer-songwriters. Since that unforgettable debut, Vernon has been up to countless side projects and collaborations, (we in the Twin Cities have been lucky to get to see most of them firsthand), but he has finally returned to the project that made him famous, delivering a coruscating, contradictory, sometimes funky, always extraordinary listening experience. The album, which is sure to be on many “Best of 2011” lists this year, shows amazing growth, branching out in several unexpected directions.

For Emma, For Ever Ago felt unified conceptually and musically, centering on the theme of loss and unrequited love, with simple song structures performed with simple guitar strumming and vocals. It even came with an immediately relatable backstory and an indelible image of a brokenhearted Vernon sitting all alone in a wintery northwoods hunting cabin. The self-titled follow-up is much harder to categorize. The songs are more complex, the instrumentation more varied and dense. The individual tracks are as diverse as the geographical locations that name them.

Opener “Perth” starts with a snare drum and the ethereal vocals that made him famous and builds to a crescendo of crashing electric guitar and horns. Vernon explores his lower register to positive effect on the groovy “Minnesota, WI” as well as on “Hinnom, TX” – on the latter harmonizing baritone with his own auto-tuned falsetto. The more traditional “Holocene” and “Towers” anchor the album giving it somewhat of a center of gravity. After (instrumental synth interlude?!) “Lisbon, OH,” the album ends with “Beth / Rest,” a song that feels like a weird 1980’s Bruce Hornsby pastiche, but nevertheless somehow works. It serves as a brilliant and off-kilter finale to a brilliant and off-kilter album.