Nick Diamonds: I am an Attic Review (plus free download) 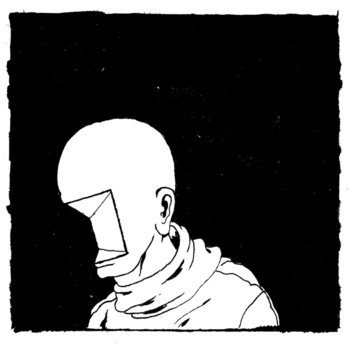 Nick Diamonds, known for his work with the amazing pop weirdos Unicorns and Islands, has dropped a solo LP titled I am an Attic on his bandcamp page. While it seems like the album is a legitmate side project (which means Islands still live and, sadly, Unicorns are still extinct). While these songs clearly haven’t been put through the process that Diamonds usually applies to his material, it still is an interesting batch of songs that highlight his unique and compelling songwriting voice.

Although his material has always been strewn with dark undertones, Diamonds is straight up buzz kill on the LP, with the song “Used to Be Funny” circling around the wrist slitting mantra “that was a long time ago,” referencing good things in his life that no longer exist. In the tags for the album, Diamonds references both the tone and quality of the album, labeling the songs under the category “bummer” and “bedroom.” Both apply, but like everything he does it isn’t easy to categorize all that is going on. The 11 songs on I am an Attic are, as one would expect, stripped down versions of the material fans are used to from Diamond. “You Must be Choking” features a forlorn vocal line meshed with a wobbly guitar, creating a seasick like feeling that feels like an anchor tied to the listeners ankle. When he starts “Fade Out” with the line “everyone knows this song but you,” his usual playful voice sounds worn and sad, heavy with the weight that even songs about jellybones can’t overcome. There are a few tracks (like “Dream Dream Dream”) that seem a little to by the numbers, but even in his bedroom and stripped of the goofy nature and bells and whistle Diamonds shows that he is a supremely talented songwriter who crafts songs that fall just outside of the normal “pop” spectrum while still writing songs that have a strong playback value.

Is I am an Attic going to surpass Diamonds work with Islands or Unicorns (or even his retro folk of Human Highway)? No. But these songs are the equivalent of the notes of a famous writer. While they aren’t the polished final pieces of work that a novel (or album) would represent, they serve as a reminder of the immense talent possessed by certain individuals. With outlets like Bandcamp, artists like Diamond now have an outlet to release material that simply wasn’t a good fit (re: too depressing) for music buying public. That doesn’t mean you shouldn’t check out albums like I am an Attic, as they help to connect the dots to artists like Diamonds who often hide behind their convoluted songs and knotty wordplay to not let people in. While it is rough around the edges, I am an Attic offers a glimpse into this fascinating artist and his great songwriting talents.

The Boston Globe (Boston, MA) August 7, 2007 | Jeffrey Krasner Before she met with the five members of the Massachusetts Hospital Association’s CEO Search Committee a few weeks ago, Lynn B. Nicholas did her homework.

“I Googled them all, and I searched for photos of them online,” said Nicholas, who will start as chief executive of the hospital association Aug. 20. “I read about their institutions, their towns, and I spoke to people who knew them. It’s called preparation. I like to be prepared. I’m known for that.” The preparation paid off. In a conference room in the Hilton Boston Logan Airport Hotel, Nicholas was able to greet each committee member by name. They were impressed.

“She came across as a very confident person, and it showed she really wanted the job,” said Daniel Moen, chief executive of Heywood Hospital in Gardner and chairman of the search committee.

It was classic Nicholas, say those who have worked for her.

“She really walks the walk,” said Barbara E. Corkey, director of obesity research and vice chairwoman for research at the Boston University Department of Medicine. Corkey is a director of the American Diabetes Association, the patient advocacy and research funding organization where Nicholas was chief executive for 2 1/2 years until December.

“Whatever she’s asking others to do, she’s done herself,” said Corkey.

Nicholas, 53, was selected for her new post during a tumultuous period for the Massachusetts Hospital Association. In January, its board summarily fired longtime president Ronald M. Hollander. Board members said that under Hollander, the organization hadn’t adequately promoted its agenda on Beacon Hill. For instance, the association was not a major player in crafting the state’s healthcare overhaul law, which is intended to provide health insurance for all residents. here boston logan airport

In late June, after the meeting with the search committee, Nicholas was one of three candidates invited back for a second interview.

But the process was almost upended a few weeks ago when staffers persuaded Robert E. Gibbons, the hospital association lobbyist who was interim chief since January, to formally apply for the job. But when the board voted for a chief executive July 19, Nicholas was the only candidate considered and was selected unanimously.

While Gibbons’s fate hasn’t been decided, Nicholas said she wants to keep him at the association. “My goal is to get him to stay.” When asked about her qualifications, Nicholas recalled her start as a laboratory technician at Morristown Memorial Hospital in New Jersey in 1976.

“I know what it’s like on the inside,” she said.

Nicholas did not stay in the lab long. She rose through the ranks to become laboratory manager, head of lab services, and ultimately senior vice president for clinical and ambulatory services. From there she was recruited to the New Jersey Hospital Association in 1995, as chief operating officer. She became head of the Louisiana Hospital Association in 2000.

As leader of the Louisiana group, she is remembered as a skilled consensus builder who was able to get members to support unpopular causes that Nicholas believed were in their best interest. Her successor, John Matessino, said she raised association dues for the first time in years, and then used the money to build a professional lobbying staff.

“She brought LHA out of the dark ages into the modern world,” Matessino said.

W.F. “Bud” Barrow chief executive of Our Lady of Lourdes Regional Medical Center in Lafayette, La., said that given her skills, he thought it was inevitable that Nicholas would move to a larger organization.

“I never thought we’d keep her past the five years we had her,” Barrow said.

In 2004, she was recruited to the diabetes association. But Barrow, who has kept in touch with Nicholas, said the job “was not a match made in heaven.” He does not think she was cut out for a patient advocacy group.

“My guess is organizations like the heart association or the diabetes association are about working with volunteers and raising funds,” said Barrow. “Lynn Nicholas is about advancing public health policy.” Nicholas agreed the diabetes association job wasn’t ideal, and admitted the group was disappointed by her fund-raising. Direct public support for the group was $151.7 million in 2004, and rose 3 percent to $156.2 million in 2005, the latest year available. website boston logan airport

“The job was less about policy and more about fund-raising,” said Nicholas. “There had been periods of time when the association had double-digit growth in fund-raising, and there were some expectations that a new chief executive could just make that happen.” Nicholas said she was released at the end of 2006 from a three- year contract.

As she prepared for her job with the hospital association, Nicholas declined to speak in detail about Massachusetts’ healthcare reform experiment, or how the state’s hospitals want to influence its implementation. But she was eager to make note of her first action as incoming head of the group: Removing a “staff only” sign from the executive suite at its Burlington offices.

“This association belongs to the members,” she said.