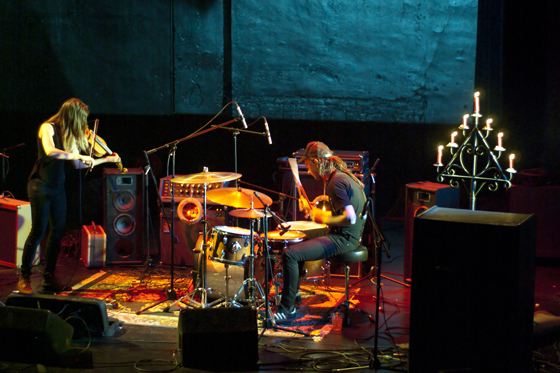 Any time you get together two members of other, well established bands, there is a generaly feeling that you will know what they are going to sound like. While it obviously isn’t always the case, that theory works fairly well for the debut, self titled tape from local noise duo Myrrh, a newish group featuring Jackie Beckey and Andie Mazorol. Local fans will recognize Beckey from her work as viola player and singer of Brute Heart and Mazorol for his many roles, but most notably as drummer for Mother of Fire.

Local music fans (or well connected national/international fans) who have heard Brute Heart and Mother of Fire will probably be able to have a general impression of what these two sound like as a pair. The multi layered vocals that make Brute Heart so haunting are gone, with the melody left simply to the kraut driven rhythms of her plucked and distorted viola. Like his work with Mother of Fire, Mazorol does more than just keep the steady, hypnotic pace, often complimenting the noise and squalling with persuasive drums beats and challenging textures. The songs operate under a definite lo-fi haze, which was either placed their intentionally or reflects a budget and studio situation that doesn’t allow for a crisper sound. No matter what the reason, the feel of the album is tense and claustrophobic, with the beat slowly marching forward, head bowed in solitary reflection, which Beckey’s frenzied viola playing wraps the listener in to the dystopic noise.

The band, for now at least, seems relegated to being a side project for the two artists, which is too bad. The red eyed kraut jams are both heavy and poetic, feeling neither too druggy nor too orchestrated, walking that edge where it isn’t too sloppy but it feels genuine and organic. The group obviously aren’t putting too much effort into promotion (they also have some Christian rock competition in Minneapolis), but don’t let that or the lo-fi nature of the release fool you into thinking this isn’t another great entry into our bursting at the seems local scene.

Mondaq Business Briefing September 22, 2008 | Fay, Michael Introduction This is an interesting case dealing with the situation where the trustee cannot ascertain for certain whether a beneficiary is alive or dead.

When the settlor died in 2002, the trustee carried out extensive enquiries as to whether the nephew was in fact dead. It was not possible to locate a death certificate of the nephew but none of the enquiries produced any evidence that the nephew was still alive. go to website deed of trust

Held The Court was satisfied from the evidence that the nephew was no longer alive and as such the only continuing beneficiary of the Trust was Middlesex Hospital (which having merged with University College London Hospital (“UCL”) was known as UCL).

Comment This case is useful for trustees who find themselves in a similar situation to the trustee of the Alpha Zeta Trust. It is also noteworthy that the Court confirmed that the decision to pay the entire trust fund to the trustees of UCL, given the uncertainty surrounding the death of the nephew, was a momentous decision in relation to which it was right for the trustee to seek the approval of the Court.

The content of this article is intended to provide a general guide to the subject matter. Specialist advice should be sought about your specific circumstances.