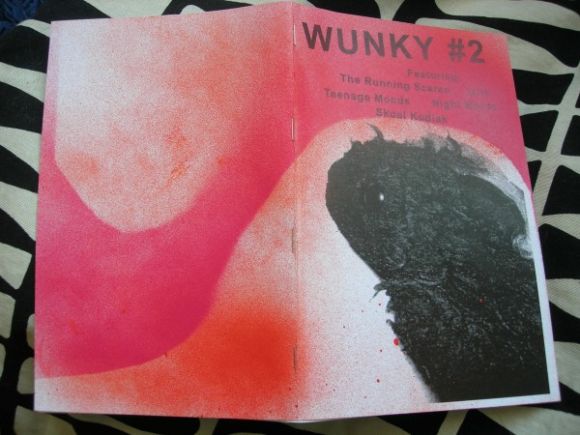 The Running Scared are good friends who never fail to put on an awesome party show! Rusty (vocals), Trevor (bass), Gloria (guitar and vocals), and Damien (drums), hung out by the fire in the back of the Nomad before (and after) their set and discussed songwriting, fast food and phobias. So much fun, it could have gone on all night! Hear music from the group HERE.

Erica- O.k. you guys, what is your songwriting process like when you guys get together and write a song?

Rusty- Uh, it’s embarrassing to say, I feel like…

Gloria- Well, we say, ‘We should write a song today..’

Rusty- And then Gloria comes up with a riff and then everybody plays it, and then I make up none sense words to go along with it that I then change into real words later.

Erica- What would you say is a main theme to what your songs are about?

Damien- I like to say misogyny, lust, and paranoia.

Rusty- I’ll clarify that I write everything in character…. So it’s not MY misogyny, lust and paranoia.

Erica- So it’s different characters all the time?

Rusty- It’s different characters. It follows themes of like, action and danger and

Trevor- Dark grooves and noise are also themes that come up frequently.

Erica- A pessimistic view? Like, things aren’t going to work out?

Erica- Do you guys have any pre-show rituals either individually or as a band?

Gloria- I like to drink beer in the shower before shows.

Erica- I like to drink beer in the shower, too.

Rusty- I like to get to shows a little too early and be irritated about that. (laughing)

Damien-We’ve tried to relax on being overly punctual.

Damien-  I’ve been playing in clubs for ten years… and we have always been super  punctual.

Damien- We beat the sound guy there usually, you know, there’s no drink tickets  usually by the time we get there…..

Damien- So you know, it fuels our anxiety…We usually like to play first, for better or for worse, we always end up playing first.

Trevor- There’s a clean slate, there’s no precedent set, you know, kind of sets the energy, kind of lets us come out of the gates strong, I feel like, when you play  different clubs with different bands…. I like to play on bills that are like grab bags, with different bands that have different sounds. Setting the stakes higher, playing first is good. That, and for some reason in this band I’m more nervous than I am in other bands.

Erica- Before you go on?

Trevor- Well just in general. That’s why I never face the crowd really in this band.

Erica- That’s kind of your thing.

Trevor- Well yeah, I don’t know, it’s like a security blanket. I feel like I have more  emotionally involved. I care more about what people think. I don’t want to look or see anybody participating or not participating. (laughing)

Rusty- (laughing) …Well, I think we ARE kind of exposed, though, if we’re playing a bill with punk bands or indie bands, we’re not really a punk band or indie band. We’re like a standard band and there’s some amount of anxiety that’s like, don’t look at us, we’re just a standard band.

Erica- A very serious question, what is your favorite fast food chain?

Damien- I’d have to say Wendy’s.

Trevor- That’s a loaded question because there’s so many variables.

Gloria- Depends on your mood!

Trevor-  Is it for value, or for taste?

Trevor- Aww, this is stupid, what are we talking about?! Taco Johns, man!

Erica- O.k. What would you say is your greatest fear?

Trevor-The failure of not trying is pretty terrible, too. You know, getting too wrapped up in thinking about failure, that you don’t try.

Rusty- Yeah, that’s pretty harsh. Nothing like needles, though.

Erica- You’re not afraid of needles, you have tattoos.

Erica- So you’re afraid of injections?

Rusty- Yeah, when I get injections I can feel the blood transferring  and I pass out.

Erica- Do you really? I didn’t know that about you.

Trevor- I guess we don’t have to worry about Rusty having a heroin habit.

Erica- O.k. So, you two have glasses (to Rusty and Trevor) but do you guys (Gloria and Damien) wear contacts?

Rusty- In high school I wore hard contacts for like, six months and it repaired  my vision for a year. The hard contacts re-molded my eyes and I could see for  like a year with nothing, but then I went back to glasses.

Damien- There’s an optometrist who lives next door to me and he’s got his offices  in his house, and what he does is like, it’s called “Learn To See,” that’s the name of his clinic, and it’s like vision training. So he takes people with bad vision and like, trains their eyes.

Damien- However, he wears glasses (laughing) so I don’t know how successful it is.

Trevor- It’s pretty weak, I gotta say, I can’t read with my glasses on, though.

The optometrist said that I need bifocals, but I’m not willing to go there yet.

Rusty- You can get invisible bifocals so no one can tell….

Trevor- Yeah, but I don’t want to do that, it seems inconvenient..

Trevor- We’re all fucked up!

Erica- Oh my god, you guys! Are you guys not getting proper nutrition as a band?

(laughing) As Running Scared, would you say you are getting proper nutrition?

Rusty- Too much Wendy’s, too much-

Erica- Did you guys go to your high school prom?

Damien- I went to my junior prom.

Gloria- Went to my senior prom.

Erica- Can you tell me an anecdote from your prom night? Something memorable that happened.

Trevor- My best buddy, Jade and I went with two dates each to our junior prom in  a really nice town car driven by a sharp dressed friend of one of our dates brother, and it was great! And somehow I think that we both, we asked girls and then our real  dates, out of the two each, we ended up being more smitten with the other and I think it switched somehow. I don’t know….

Erica- How about you, Gloria?

Gloria- I was going to get stood up!

Rusty- Sophomore year a junior girl asked me and then offered to pay for my tuxedo,  in order to get me to go, and then we went and she had a dress that would not allow  her arms to move!

And so she could only dance like this (silly dancing ensues)

Trevor- The roof was never raised!

Damien- I guess this didn’t happen directly to me, but when we left prom, the group that we were with split up into two cars, we didn’t have anybody driving us around in  a town car or anything, so our car got to where we were going and waited and waited and waited, and uh, it turned out that the other car had been like, in an accident  downtown and they totalled their car. They crashed into a lawyer, no one was injured, thankfully, but the car was totalled and they came back and it kind of ruined  the rest of the night. Everybody was kind of in a shitty mood. At prom I just hung out  outside, it was not my scene.

Erica- Have you ever had sex in your parent’s car?

Fast-food restaurants can be hazardous for teens.

Occupational Health Management March 1, 2000 Fast-food restaurants can be hazardous for teens Adolescent workers injured on the job in the restaurant industry are most likely to be working in fast-food establishments, a new study by the National Institute for Occupational Safety and Health (NIOSH) found.

Studying data from a national sample of hospitals over a two-year period, NIOSH estimated that approximately 44,800 occupational injuries to teen restaurant industry workers (ages 14 to 17) were treated in hospital emergency departments across the United States during that time. Of these injuries, an estimated 28,000 or 63% occurred in hamburger, pizza, and other fast-food establishments.

Adolescents working in the restaurant industry, in general, were at six times greater risk of sustaining a work-related burn injury than teens working in any other industry, the study found. Overall, during the period studied, emergency departments treated an estimated 108,000 work-related injuries to teens in all industries. site fast food restaurants

As young people prepare to take temporary employment or work extra hours . . . it is important to be aware that adolescents are injured on the job far too often, says NIOSH Director Linda Rosenstock, MD, MPH. All of us have key roles in preventing these injuries, now and throughout the year.

In general, the restaurant industry and other retail businesses rank high among U.S. industries for risk of adolescent worker injuries. The retail trades employ many of the nations working adolescents.

Because statistics are not available on the number of adolescents working specifically in the fast-food industry, researchers lack key data for determining if these teens are at higher risk proportionally than their counterparts in other segments of the restaurant industry. Even in the absence of those measures, the findings from the new study show a need for better training and other steps to protect young workers, Rosenstock says.

The NIOSH study also found that for teens working in fast-food establishments:

Although males and females had similar injury rates, risks for injury by task and location differed by gender. Adolescent male employees were more likely to suffer burns, lacerations, and other injuries while performing tasks associated with cooking, while adolescent female employees were more likely to suffer contusions, strains, sprains, and other injuries while completing tasks related to cashiering and servicing tables.

Nearly half of all burn injuries involved hot grease. Such injuries can be prevented by providing handles on scrapers and other cleaning tools, providing appropriate gloves, allowing grease to cool before it is moved, and training employees in safe work practices, among other precautions, NIOSH suggested. web site fast food restaurants

More than half of all fall injuries were related to wet or greasy floors. It is important to use slip-resistant floor materials and to keep floors dry and well-maintained, Rosenstock says.

By age, 17-year-olds suffered the highest proportion of injuries among teens working in fast food (55%), followed by 16-year-olds (38%).