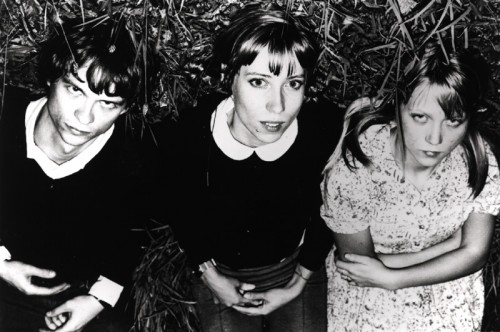 I may have a warrant out on me from the cred police after this admission but until relatively recently I had never listened to Washington DC’s Quix*o*tic. In fact, I discovered the band via hearing a comparison to Twin City band Brute Heart – a comparison that holds water. Like Brute Heart Quix*o*tic played minimalist, female-fronted, avant garde pop. It’s the vocals though that are the most similar – sisters Christina and Mira Billotte use the same kind of flat apathetic singing tone that Brute Heart utilizes (when they aren’t howling). However, despite the vocal affectation – to judge the Billotte sister’s singing as “apathetic” isn’t entirely correct. While the singing style may have roots in the “I don’t give a damn” punk aesthetic (Christina Billotte is/was a DC punk legend by the time she started Quix*o*tic), the lyrics are actually incredibly earnest.

The lyrics are also generally incredibly simple. One of the main criticisms I have heard of Quix*o*tic is that their style is technically unsophisticated (Take this misguided Pitchfork review for instance). The drum pieces, the basslines, the guitar – while each instrument shines from time to time, overall the aesthetic isn’t incredibly complex. In fact every time I put Quix*o*tic on the box, the ghost of every jam band fan I have ever talked pops up in my subconscious to gripe “these guys can’t even play maaan.”

The fact is, Christina Billotte is/was actually a pretty damn good guitarist. And in Quix*o*tic she occasionally shows flashes of that brilliance, though by and large she seems more interested in experimenting with atonal chords than she is in showing off. It’s besides the point anyways. Quix*o*tic’s aesthetic isn’t about blistering riffs and instrumental majesty. In fact, the one element that ties the sound together isn’t instrumental at all – it’s the sister’s vocals. Both Billotte’s have tremendous range, and though they occasionally try not to show it, they are capable of really beautiful singing. The best Quix*o*tic songs I have heard put the instruments in the background and focus entirely on the Billotte’s almost Nina Simone-like purrs. I am talking about tunes like “The Breeze” and “On My Own” here – two songs off of the group’s sophomore effort Mortal Mirror. Both have very little in the way of instruments – just a scattering of drumbeats and the sister’s stunningly velvety vocal tones.

Despite the fact that Quix*o*tic were pretty well received critically (when Sonic Youth invites you to play their curated ATP show its gotta count for something) they only lasted long enough to release two albums before breaking up in 2003. Mira Billotte went on to form NYC group White Magic, Christina moved to California and (as far as I know) isn’t currently performing. Tragically original bassist Brendan Majewski committed suicide in 2011, however 2001 – 2003 bassist Mick Barr currently has a finger in many different projects.

Quix*o*tic may not have lasted for very long but in the space of their five years of existence they did manage to release two excellent records, Night for a Day and Mortal Mirror. I highly recommend you check out either, particularly if you happen to be a fan of locals Brute Heart.