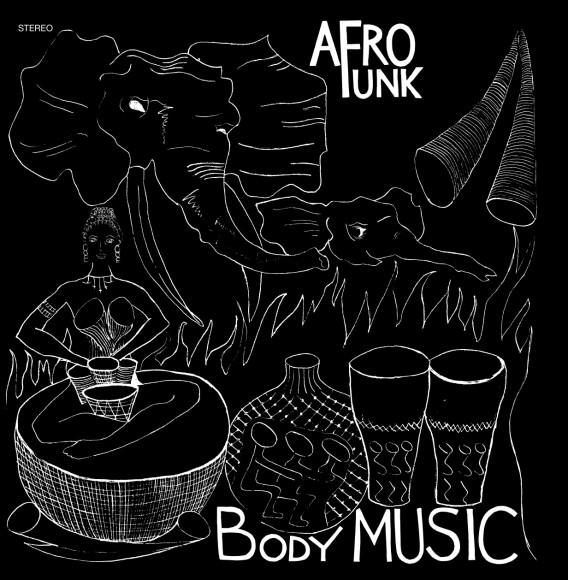 Naming your band after the type of music you play isn’t necessarily a bad idea, but it made me a little apprehensive diving into the latest re-issue from local label Secret Stash. London band Afro Funk’s album Body Music is the record in question, a release that didn’t get the band the fortune or fame they had hoped when it first dropped in 1975. While it didn’t set the world on fire as far as sales, that doesn’t mean that this band of West African ex-pats didn’t create solid music, combining the afrobeat grooves from their home country along with some classic soul and funk on this six song EP. While I was worried their take on the afro beat would be overdone and cheesy, their expression of their namesake genre is actually the record’s strength.

When the band sticks to the sharp horns, wah’d-out guitars, and infectious rhythms of afro beat, they hit on all cylinders.  On tracks like “Afro Beat” (which, lets be serious, is going a little overboard—album, band name, and song??), the eight-minute scorcher “Farewell to Ibusa,” the thick groove of “Obanya Special,” and the understated strut of “Tei Egwu,” the band prove adept at touching on all the relevant afro beat reference points.  Their songs are tight, but with plenty of room for exploration.  The percussion and bass creep into your spine, while the horns punch through the mix to keep your head bobbing.  The vocals are impassioned and, while not overshadowing the music, add another layer to the euphoric collage. Where the band loses their way is when venturing away from their namesake genre and into ill-advised attempts at funk and soul.  The singing on “Hot Love” is overdone and sounds like second-rate reggae. The band labors to bend their sound in a direction it shouldn’t bend.  Unfortunately this isn’t the greatest sin on the record, a distinction that falls to the cheesy Issac Hayes sounding “Try and Try,” which is a faux funk-soul albatross that hangs around the neck of the album. It plods through three minutes of uncomfortable music that does not highlight the band’s strengths.

I find it somewhat amusing that I went into this album worrying that it was going to be an overblown and trite take on a genre that I really love.  Strangely enough, my biggest complaint from the record is when they ventured away from the horns and stretched out grooves.  The four of six songs that stayed within their wheelhouse make this record worth checking out, but the two miscreants plague the middle of the LP. For a group that names their band, album, and a song on their album after a genre, you would have thought they would know better than to stray from music that was obviously close to their hearts.

Hear samples from the record and order the LP from Secret Stash HERE.  The label is having a release show for the record tonight.